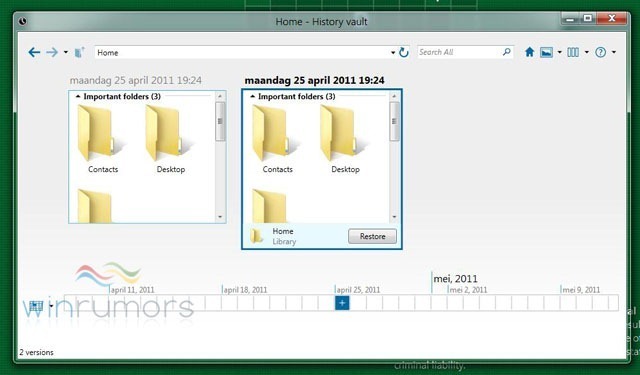 As with any major product that leaks, all the secrets and features begin to surface on the Internet. Earlier today, Windows 8 build 7955 leaked onto a private FTP server and is expected to popup around public torrent sites later on.

As the leak lands in the hands of more users with access to the build, more screenshots surface of features. This time, the "History Vault" appeared on winrumors.com. The screenshot reveals that Microsoft is working on a backup and restore feature, similar to Time Machine for Mac OS X.

History Vault will manage all your saved files through a timeline (found on the bottom), so users can restore edited or deleted items. Although the interface and functionality will likely change over the coming months, the base idea that Windows users will soon be able to restore individual items, rather than an entire restore point, saves everyone a massive headache.