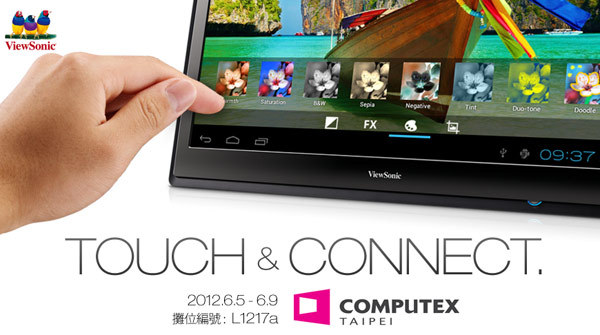 We will likely be hearing a lot about Windows 8 in early June, thanks to a number of product announcements that will be made during the Computex trade show in Taipei. Today, Engadget reveals that it has received an invite from monitor maker Viewsonic and the company is teasing the media with what it is calling its "Touch and Connect" product line up.

That will apparently include a multi-touch display designed to run Windows 8. It will be interesting to see if this display is meant for desktop PCs that are running Microsoft's next OS. If so, we will also be interested to see if desktop PC users will ditch the mouse for touching their monitor.

Viewsonic will also be showing off what it is calling a 22-inch "smart business tablet monitor" that, at least according to the invite picture, is running on Android 4.0 (Ice Cream Sandwich).  We don't think a 22 inch anything can properly be called a "tablet" but if Viewsonic has created a large monitor with Android 4.0 installed inside it could be a replacement for all those "all-in-one" PCs.

Viewsonic will also be showing off some non-PC and mobile OS products at Computex, including some interactive billboards. All in all, it sounds like an very interesting line-up.