As we enter a PC hardware era where tablet and notebook displays have higher resolutions and desktop monitors can now reach the 4K level, more attention is being made to how text and applications scale with these high DPI displays. In a new blog post, Microsoft has announced that Windows 8.1 will feature some DPI scaling improvements. 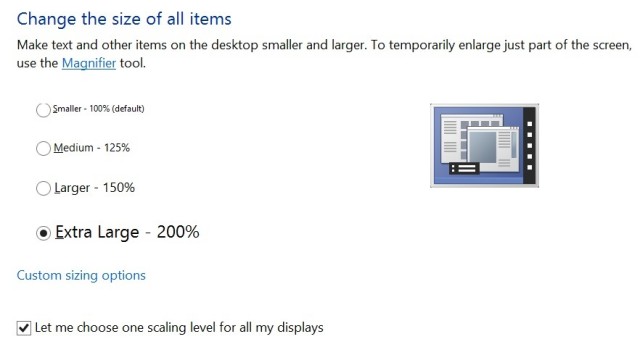 The Extreme Windows blog states that one change in Windows 8.1 will offer a new option to increase the percentage of text and other items on a display up to 200 percent, or "Extra Large." This compares to the "Larger" upper limit in Windows 8 where you could only go up 150 percent on text and items.

If you have more than one PC monitor on your desktop, it's more than possible that the displays do not have the same DPI. In this case, Windows 8.1 will use per-display DPI scaling. The blog states, "By default, Windows 8.1 will choose the optimum DPI scaling value for each display based on the value chosen for overall scaling in the control panel." You can see an example of how that works in the image above, where each monitor has a different DPI but the calculator app appears to be close to the same size on all three screens.

Windows 8 app developers can also use Microsoft's APIs when they make their apps in order for them to have an optimal look when shown on a high DPI screen using the "Extra Large" scaling option.