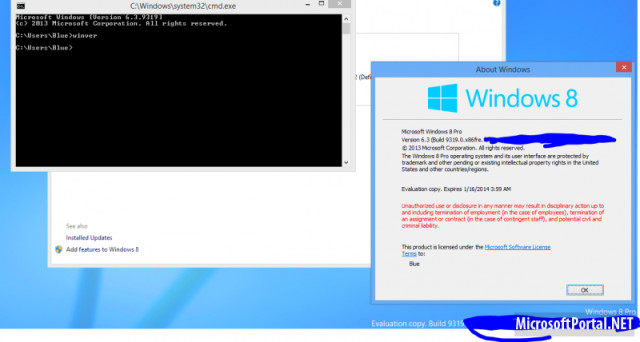 Since the launch of Windows 8, the string of leaks of Windows builds has all but come to a halt. While we have been hearing quite a bit about Windows Blue, the images you see above are supposedly from the M1 of Windows 9 (unconfirmed).

As noted by the post on MicrosoftPortal.net, the M1 build kernel has been given a bump to 6.3 (Windows 8 uses kernel 6.2). In addition, the images are supposedly from Windows 9 build 9319; Windows 8 was build 9200.

While this screenshot does not give us much information about the next major installment to the Windows product line, seeing that screenshots have begun to leak is a good sign for those who want a Window into Microsoft’s inner workings.

There is currently no timeline for a Windows 9 release but, based on past history, one could hedge that it will be around three years after the release of Windows 8. Of course, with Windows Blue possibly offering up an accelerated launch schedule and push towards Windows 9, the platform could arrive far sooner than we expect.

In addition to the build 9319 above, there has also been a posting of a screenshot showing that build 9289 is also in the hands of testers too.

It is possible that both of these builds could be Windows Blue or one could be from Windows 9 and the other Blue. Until Microsoft comes clean on the dividing line between the two platforms (don’t hold your breath), enjoy the images and know the builds are in the hands of testers.

Of course, this could be an elaborate hoax, so take it with a grain of salt.