It's shocking really, that Microsoft would be working on Windows 9 and Windows Phone 9. Ok, not really, but references to both next generation platforms have popped up in places around the web including Microsoft's own jobs board.

In a posting for a Bing Software Development Engineer, Microsoft calls out that the particular role will be working on IE 11 and Windows 9 which you can see in the image above. 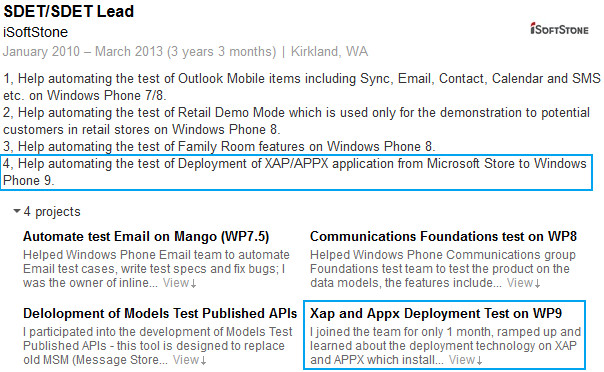 In addition to the Windows 9 posting, Windows Phone 9 was also mentioned by iSoftStone who claims to have worked on a month long project for Windows Phone 9 related to the deployment of XAP/APPX applications.

Finally, an employee at Microsoft stated in her profile that she is working on the Windows 9 OS for Nokia, HTC and Qualcomm devices. Now, seeing those vendor names, it would seem more likely that it's for Windows Phone 9 rather than proper Windows 9, unless Microsoft is gearing up for a shift in how it promotes products. Notably, there are some large names missing such as Samsung from that list, but we wouldn't read into any of this information about who launch partners will be for the platform as this is limited information, at best.

None of the above information is ground breaking by any means, but it does offer a small window into the world of Microsoft platform development.