As we inch closer to the release of Windows 10, we notice more and more of Microsoft’s One Store strategy, and the increasing importance of moving towards a universal app model. Microsoft is now offering developers new insights on the current market trends, and the level of adoption of its latest operating system.

As you can probably see from the two graphs below, most app downloads in the Store came from devices running Windows 8.1 and Windows Phone 8.1, which is a good reason for developers to start designing their apps in the new universal app model, where VLC is a good example. It’s also important to optimize for low-end devices, as those account for 68% of all app downloads.

Regarding app categories, Games are obviously the most popular across all devices, followed by Productivity Tools, Music & Video, and Social. When judged from the perspective of the ratio between total downloads versus total available apps in that category, Social and Photo, the exposure opportunity is greater than in Games.

When looking at downloads by market, the U.S remains the biggest across both platforms, but we notice an interesting development in China, India, and Brazil, as a result of Microsoft’s efforts to bring carrier billing in emerging markets, offering as much as an 8x increase in total paid transactions.

Another trend that is worth mentioning is that paid apps continue to decline in overall revenue, while in-app purchases are back on top as of April 2015, making around 55% of the total developer payout. 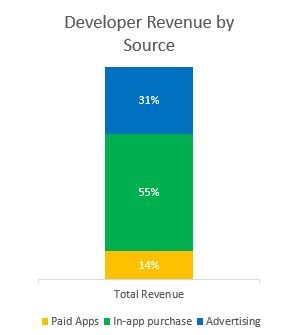 While IAP continues to grow in total revenue month over month, we saw an even larger spike in IAP revenue share over the last quarter, driven by introduction of new apps since our last post such as Age of Empires: Castle Siege, Age of Sparta, Asphalt 8: Airborne, Candy Crush Saga, Dragon Mania Legends, My Talking Angela, and The Sims FreePlay that rely on the IAP revenue model.

With Windows 10 around the corner, and the recent developments in emerging markets, it looks like Microsoft has a lot of potential to make Windows an even more attractive platform to developers, as they’ll be able to reach people across many countries and device sizes.