Microsoft today announced the availability of the next major version of Windows Holographic for HoloLens 2 devices. Version 21H1 is beginning to roll out with a bunch of new features. Interestingly, while 21H1 for desktop is going to be just an enablement package that will light up minor new features for the OS, the version seems to be a major one, bringing features such as the new Chromium-based Microsoft Edge, Settings app improvements, a revamped Power menu, and much more.

First up is the addition of the new Microsoft Edge browser based on Chromium, which will be the default offering for HoloLens users. However, the company says that Legacy Edge will continue to exist in the OS. Users will also be able to sync history and favorites as it is based on a shared codebase. It also supports WebXR and the 360 Viewer extension for immersive web experiences, the firm says. 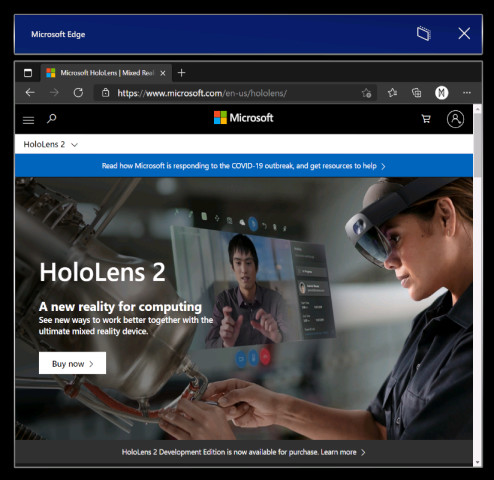 Next up is the new Settings app that contains granular controls and is tailored for the HoloLens 2. It includes updated settings for Sound, Power & sleep, Network & Internet, Apps, Accounts, Ease of Access, and more. The firm adds that since the new Settings app is “distinct from the legacy Settings app”, it will remove any previously placed windows in the environment. A few examples of the improved settings experience include the ability to set or reset default apps, adjusting independent app volumes, account management, and various improvements to audio preferences.

There is also a new Display color calibration tool in Settings to let users choose alternate color profiles to adapt to various display brightness and ambient light settings. There are six pre-set color profiles to choose from.

Another nifty feature is a new Swipe to type feature that mimics the experience found on mobile devices. Users can pass the tip of their fingers through the letters and can continue typing just like on mobile and the system automatically inserts spaces after each word. However, the company calls the feature “tricky” as the holographic keyboard does not offer any haptic feedback or resistance to users’ fingers, unlike on mobile devices.

Rounding off the major changes is a new Power menu that can be accessed from the ellipsis icon next to the users’ profile picture. It offers users options for signing out, shutting down, or restarting the device, and displays a yellow indication icon when updates are available, similar to the Windows 10 power menu. The sign-in screen is also adding support for displaying multiple user accounts, making it easy to switch between accounts.

There also are updates aimed at IT admins such as the auto-enabled Visitor Auto-logon for Kiosk mode feature, improved error handling, and more. You can head to the release notes page here for complete documentation on everything that is new, along with useful links. The Redmond firm also notes that it will no longer serve updates for version 1903, with the only supported version now being 2004, 20H2, and 21H1.

Windows Holographic version 21H1 is heading out to HoloLens 2 users starting today bringing build 20346.1002. Users can head to the Settings app and check for updates from the Windows Udpate section under Update & Security. The company has also made available manual update packages for IT admins.