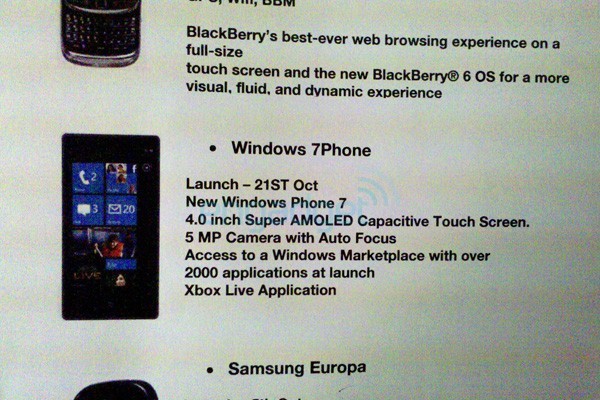 Windows Phone 7 is being eagerly awaited by techies everywhere. Some question its attempt to rival big players like the iOS and Android platforms. Microsoft will be holding a Windows Phone 7 launch event in New York and London on October 11.

Neowin previously reported that Microsoft will launch a number of Windows Phone 7 devices on October 21 at several launch events worldwide as well as making them available in stores on the same day in the UK, France, Germany Italy and Spain. For the US it seems they’ll have to wait till 8 November.

Engadget have reported they had been forwarded a snapshot taken from a Three UK document. The shot reads that the Windows Phone 7 will have 2000 applications when it’s launched and that it comes equipped with a 4.0 inch Super AMOLED Capacitive Touch Screen. Amongst the Windows Phone 7 device, lays the Samsung Europa and the Blackberry Torch.

Before long, it could be a distinct possibility that the amount of WindowsPhone 7 apps surpasses the amount of those on the Apple app store. It seems we’ll have to watch this space and see whether developers flock to Windows Phone once again.