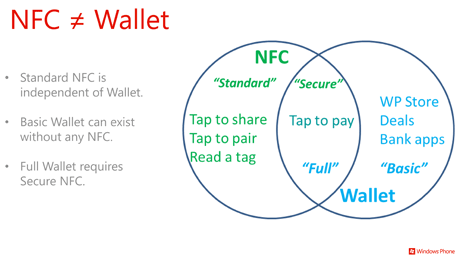 NFCworld.com reports that Microsoft showed how the NFC hardware can also be used for the mobile wallet feature in Windows Phone 8. The wallet will be centered on a "hub" where users can add payment cards which can be used for not just regular online purchases but also for NFC-based transactions.

The hub will also be the place where users can find special deals or price cuts that are powered by Microsoft's Bing search service. Windows Phone 8 developers can access what Microsoft is calling Wallet Agents to send users updates on news and special deals in their wallet hub.

Microsoft is working with Orange in France to develop its first NFC mobile wallet service and is in talks with other companies as well. John Skovron, group program manager for Windows Phone 8, added, " ... "we have strongly encouraged all of our handset partners"  to add NFC features to their Windows Phone 8 devices.