It's no secret that Windows Phone hasn't exactly taken the market by storm since its launch in late 2010. Despite attractive products and widespread marketing campaigns, sales of smartphones with Microsoft's mobile OS have been struggling in the face of aggressive competition from its rivals.

There have been some success stories. Nokia's Lumia 920 – its flagship until the recent launch of the thin-and-light Lumia 925 – has boosted the profile of the platform, and won many awards for innovation in the process, while sales of Windows Phones in some markets have seen the platform reach double-digit market share. More good news has emerged today with the latest global smartphone shipment figures from IDC, which reveal that Windows Phone shipments grew again last quarter, and exceeded those of its closest rival, BlackBerry. 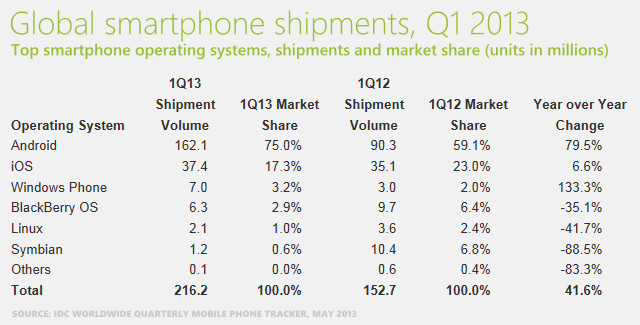 As we've known for some time, Nokia is the largest OEM in the Windows Phone ecosystem, accounting for 79% of WP devices, and IDC's Kevin Restivo said that Windows Phone's success in "claiming the third spot is a first and helps validate the direction taken by Microsoft and key partner Nokia." However, he also added that these figures must be kept in perspective: "Given the relatively low volume generated, the Windows Phone camp will need to show further gains to solidify its status as an alternative to Android or iOS."

Indeed, despite today's figures establishing Windows Phone as the third ecosystem in the smartphone space, it still languishes far behind its much larger Android and iOS rivals which, between them, control 92.3% of the smartphone market. Android's share of the market saw a phenomenal 79.5% increase year-on-year, leaping from 59.1% in Q1 2012 to 75.0% in the first quarter of this year. Samsung remains by far the largest Android vendor; its Android handsets currently represent 41.1% of all global smartphone shipments.

While Apple's iPhone shipped in greater quantities in Q1 2013 compared with a year ago, its market share actually decreased from 23.0% to 17.3%, a symptom of the explosive growth in Android handset shipments.

Total worldwide smartphone shipments across all operating systems increased almost 42% to 216.2 million devices, compared with 152.7 million a year ago.

Source: IDC via The Verge