At the beginning of this year, we had an open discussion here on Neowin with our readers, asking them which apps they most wanted to see come to Windows devices. At the time, Windows Phone had just over 150,000 apps, but there was still a long, long list of apps that users were still waiting for.

What a difference a year makes. As 2013 draws to a close, many of the apps that Windows Phone 8 users desired most have now arrived on the platform.

BBC iPlayer, Citrix Receiver, Pandora, Wells Fargo, Waze, Vine, United Airlines, Spotify, Photosynth, Good for Enterprise, Hulu Plus, and many, many more have joined Windows Phone 8 in the last year. Some other apps that have long been awaited, including Mint, Flipboard and Path, are expected to launch soon.

But the most high-profile addition to Windows Phone's app portfolio – having come to represent the platform’s app shortcomings across the tech community – was Instagram. Announced by Nokia alongside some of its latest devices in October, the app launched last week in beta form, and while there was some initial confusion about just what features were included, most appreciated the significance of its arrival.

This was, after all, a momentous occasion for Windows Phone. Nokia’s vice-president of software program management, Samuli Hanninen, told The Inquirer last month: “We have been screaming about Instagram for the past eighteen months… It’s one of the main apps in general that has been absent from the operating system.”

Its launch – even as a feature-limited beta – has come to symbolise the progress that Microsoft has made in attracting top-tier apps to Windows Phone. Nokia, too, can share in this glory, and should be greatly applauded for its own efforts to boost software on the platform, which even included developing the #2InstaWithLove app, as a means to encourage Instagram and its Facebook overlords to bring it to Windows Phone.

The sense of relief and satisfaction at the two companies over Instagram’s arrival is obvious. It was enough for Joe Belfiore, the well-known and well-liked head of the Windows Phone team, to share this tweet on the day of Instagram’s launch:

We're all gonna look back on the end of 2014 as the ending of the app-gap for Windows Phone. The 3rd ecosystem is decidedly here!

While some sites understandably reported on this tweet as an admission from the platform’s head that it would be another year before Windows Phone is finally on an even keel with its rivals, Joe cleared things up the next day, admitting that he had actually meant to type ‘2013’ instead:

So the third ecosystem is here, and considerable percentage growth in Windows Phone sales suggests that handset buyers increasingly appreciate this too. And let’s not forget that the year isn’t even over yet – there’s still time for more high-profile names to join Windows Phone in the next few weeks.

So will we, as Joe claims, all look back on the end of 2013 as the ending of the app-gap for the platform? Not so fast, Mr B.

As WMPowerUser reported last week, the results of a recent survey by Strategy Analytics shows that developer support for the platform is increasing. 32% of respondents said that they plan to develop for Windows Phone next year, up from just 16% who created software for the platform in 2013. That’s a considerable improvement – no doubt about it – but it’s important to look at that figure in context. 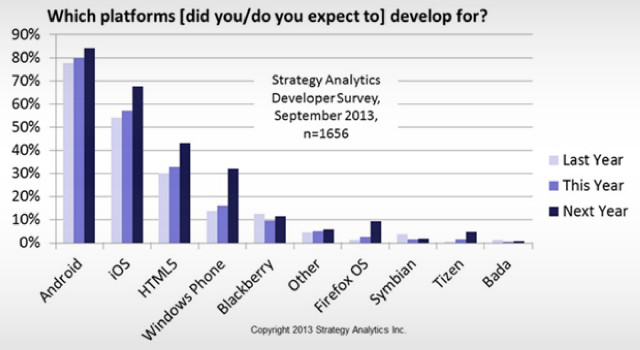 Take a look at the graph above, which shows developer intent for the various mobile platforms. Let’s set aside HTML5 – as that’s platform agnostic, rather than a platform in its own right – and you’ll see that Windows Phone is indeed the third ecosystem when it comes to developer priorities.

But look at the two platforms that lie ahead of it. 68% of developers plan to create software for iOS next year, while a staggering 84% intend to launch apps for Android. As David MacQueen from Strategy Analytics pointed out, “that’s primarily down to the huge installed base; we asked developers why they were supporting particular platforms and the top answer for both of these platforms was the user base.”

As Windows Phone’s sales grow, then, we can reasonably expect developers to adjust their priorities accordingly, and to increasingly include Microsoft’s mobile OS in their software development plans. But that isn’t going to happen this year; and, if we take Strategy Analytics’ findings as indicative of broader developer intent, it isn’t going to happen next year either.

But the broader issue here stems from how the ‘app-gap’ is defined. For some, it means little more than a focus on bringing apps to the platform that have long been available elsewhere. Fill in those gaps – to finally offer the likes of Mint, HBO GO, et.al – and the app-gap itself is closed. Problem solved, right?

In fact, there are two very significant reasons why the app-gap won’t be closed by the end of 2013, or indeed for some time to come.

The first is an issue that is perfectly exemplified in the Instagram launch, but is by no means exclusive to that app: feature parity with other platforms. When an app launches on Windows Phone that has previously been available elsewhere, it is by no means certain that that app will include the full range of features that users on rival platforms enjoy.

Yes, Instagram’s launch came with the ‘beta’ tag, which waves a flag warning users not to expect too much of it. But one has to wonder why this initial launch was so limited, given the time and resources available for its development. It is especially unforgivable when you consider that independent developers, with a fraction of those resources, have succeeded in creating apps that are vastly superior to Instagram’s official launch offering in almost every way.

These are three examples of high-profile apps representing a broad spectrum of users, and each of them arrived on the platform missing key features. In some cases, months later, these features have still not arrived.

Whatever the reasons behind each of these shortcomings – and those found in many other apps compared with their counterparts on rival platforms – the fact that even big-name apps are launching on Windows Phone with features missing is a pretty solid indicator that the app-gap cannot simply be considered ‘closed’ just because the app has finally made it into the Store.

The second indicator to consider is that of how quickly apps continue to arrive on the platform. While it’s all well and good to congratulate Windows Phone for finally attracting the apps that people have long been waiting for, that doesn’t say much about the prospects of new apps that continue to pop up on rival platforms.

Instagram arrived over eighteen months after it launched on Android. Draw Something launched on Windows Phone long after the peak buzz and excitement surrounding it had faded. Given how fickle device users are when it comes to apps and games – constantly seeking out newer, cooler stuff to share with friends – it’s not enough to say “better late than never”; it’s not enough to fill in the gaps long after everyone else has moved on to the next big thing.

This, especially, is what makes the ‘32%’ developer intent figure so significant. 32% is double what it was previously, yes, but flip that around and it indicates that 68% of the developers surveyed have no interest in developing for Windows Phone yet. That will change, of course, as Microsoft grows its installed user base for the platform, but that will not be an overnight job. Many hearts and minds are still to be won in the developer community, and among even the biggest global brands; many still remain far from convinced that Windows Phone is a platform worth spending time and resources on.

Microsoft and Nokia have done an exceptional job this year in stimulating developer interest in the platform, and it is greatly to their credit that many of the most-demanded apps that were previously absent from the Windows Phone Store have either arrived or will launch soon. But while Windows Phone has firmly established itself as the third ecosystem, it is still a second thought for many developers, a situation that continues to leave the platform’s users waiting indefinitely for apps that appear by default on Android and iOS.

Barclaycard, Virgin Atlantic, BBC News, Starbucks, JCPenney, Manchester United, Amtrak, BBM, Bad Piggies, Dots, Uber… the list of popular apps still not firmly on the horizon for Windows Phone is long. And aside from the apps that already exist elsewhere, there is no ignoring the fact that WP users can never knowingly expect a new app to launch on the platform with the same certainty that Android and iOS users enjoy. If an app is announced – from any brand, anywhere in the world – those with Androids and iPhones can confidently expect the app to become available to them quickly. For now, Windows Phone users are consistently left to face long gaps between an app’s availability elsewhere and its launch on Microsoft’s platform.

As elucidated earlier in this piece, this state of affairs will surely change in time; the gap will narrow and, eventually, close. But there is still much work for Microsoft to do.

When the company officially takes over Nokia’s devices business next year, it will command 90% of the market for Windows Phone handsets. That puts the onus of growing the platform and expanding its user base almost entirely upon Microsoft. Without that growth in user numbers, developers and brands both large and small will continue to consider Windows Phone as an afterthought when it comes to app development.

That is not a problem that will be resolved overnight, nor is its resolution the only key to sorting out the platform’s current absence from the radars of many developers. The platform itself needs work too, and Microsoft’s pace of development in that regard has been painfully slow.

The Windows Phone OS still lacks features and APIs that have been available on other platforms for ages, without which developers are simply not able to create certain apps for it, even if they are willing. More substantial enterprise support, for example – including features such as auto-VPN, enhanced MDM policies, S/MIME support and certificate management – was announced for Windows Phone in July, but won’t actually be available until sometime in the first half of next year. Apps that tap into these features therefore can’t launch on Windows Phone until this ‘enterprise feature pack’ finally arrives.

There is much more to “ending the app-gap for Windows Phone” than ticking off the ‘top-50’ list of apps that other platforms already have, and closing the gap will take a lot more than simply declaring that task complete. As the user base grows, the problem will become less pronounced as developers and brands see opportunities to reach larger audiences, but that growth will take time.

The OS itself needs development to catch up to its rivals too, while developers themselves must continue to be encouraged, prodded and nagged until they offer apps for Windows Phone with features that match their counterparts on other platforms, and without the long delays that users have sadly grown accustomed to.

While Joe Belfiore and the rest of the Windows Phone team will certainly be aware of the scale of the challenge that lies before them, and what needs to be done, it does no-one any good to pretend that the mission is already accomplished, nor that it will be anytime soon.

When 2013 draws to a close in just a few weeks time, the app-gap will still remain wide open. It will likely be a long, long time before we can all look back and declare that the gap has finally been closed.