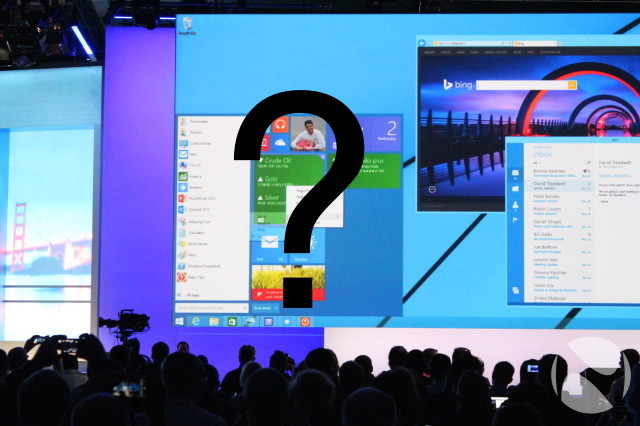 For the past 5 weeks or so, we have been uncovering quite a bit about Microsoft's next update to Windows, internally called Threshold, and since then, we have received a couple a copious amounts of emails and pings on Twitter about the update, and as we have learned more, we want to help clarify some of the common items we keep getting asked.

Is the Charms bar really dead?

Do you have any whiskey handy? If you do, pour one out. On the desktop, in the current builds, the Charms bar is dead and it is moving inside the modern apps. Currently, the Charms functionality is moving inside modern apps to a button in the header bar. The location of the new 'charms' area is subject to change and for those apps that are dependent on the Charms bar, don't be surprised if you see Microsoft politely ask them to adjust their functionality to fit with the new style.

We haven't heard anything about Metro 2.0, are they not updating the modern UI?

Here's the thing with the updated modern UI. There will be changes and new features, Microsoft is still keeping it a bit close to the chest but we are starting to hear whispers about what all will be included on the touch-side of the OS. Know that there will be updates but we are not quite ready to crack open this nut, yet.

Is it really coming this fall?

The current builds of Windows Threshold have a new watermark that no longer refers to the build as Windows 8.1 and that it is now a 'preview' build. This aligns to how Windows 8 was released, and we fully believe that this is what Microsoft will do based on our own sources as well as what others are saying. The fact that builds are now referred to as a preview means that Microsoft is gearing up to let outsiders use the build.

I thought the Start menu was coming back to Windows 8, why has this changed?

Is Windows Threshold going to be called Windows 9?

Apple hasn't put Siri on the desktop, why should Microsoft put Cortana on its desktop?

Simple, Microsoft wants Cortana on all of its key platforms including Xbox. Cortana's ambitions go far beyond that of what Apple is doing with Siri and you can already see this with how quickly Microsoft is adding features to the mobile platform. By bringing Cortana to the desktop, they will also be adding millions of users to its data pool so that it can make the service even better. More so, Cortana will eventually be able to interact cross-platform as well and it could serve as the data-link, much like OneDrive to tie services together. Imagine being on your Xbox and saying "Cortana, set a reminder to call my wife at 10 A.M" and magically, the reminder shows up on your desktop, your phone and your tablets that are running Windows Threshold.

These are just a few of the questions that we have been receiving over the past few weeks about Threshold, and if you have any more let us know in the comments below, or you can reach out to us on Twitter or Facebook.