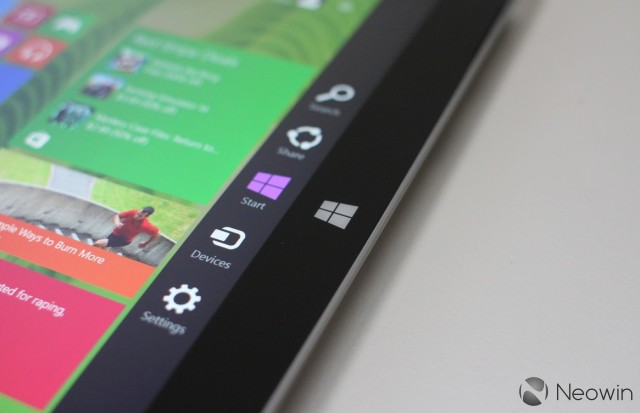 While there have been disappointingly no leaks of an actual Threshold build, information about the upcoming Windows OS has been trickling online, like yesterday, where we talked about virtual desktops starting to show up in early builds of the platform. But as Microsoft moves to position Windows Threshold as a more desktop centric OS, the charms bar will be getting reworked significantly for desktop users.

Here's the deal, the Charms bar, as you know it today in Windows 8, will be getting overhauled significantly with Threshold. Winbeta started to go down this path and from what we know, they are correct that it will be modified, we have also heard that the Charms bar is no longer hidden, nor is it a central navigation point for desktop users. We say desktop users because tablet users will still need a way to navigate using gestures, and the Charms bar could still be alive within that interface; Modern UI 2.0 features are being held a bit closer to the chest; more on that, later.

Now what is exactly happening to the Charms bar is still not entirely clear, but what we believe is happening - and this is subject to change - is that it will be moved, at least in part, inside the modern app windows; which means it could be entirely app centric. We've heard from other sources that the Charms bar has moved in previous builds, so this is not a one-off occurrence. Windowed modern apps have already been announced and to make these apps feel more self-contained they will get their own access, to some degree, of the Charms bar inside the windowed app. By doing this, it means that Microsoft can remove the Charms bar from the right side of the OS for desktop users.

And why stop at the Charms bar? Again, for desktop users, modern apps, by default, will not open up in full screen mode; Windowed mode for modern apps is the current default, and that is unlikely to change.

This is just another few small tidbits about how Microsoft is changing up the desktop experience for Windows Threshold, and how it will help to make it feel more like Windows 7, but also blend in features from Windows 8 too. As always, anything could change before launch of the OS.