Since SP3 was supposed to be mostly a bug-fix/patch consolidation release - unlike w/Vista SP1, Microsoft made no promises of improved performance for XP - the unexpected speed boost comes as a nice bonus. In fact, XP SP3 is shaping-up to be a "must have" update for the majority of users who are still running Redmond's not-so-latest and greatest desktop OS.

Of course, none of this bodes well for Vista, which is now more than 2x slower than the most current builds of its older sibling. Suffice to say that performance-minded users will likely choose to stick with the now even speedier Windows XP - at least until more "Windows 7" information becomes publicly available. 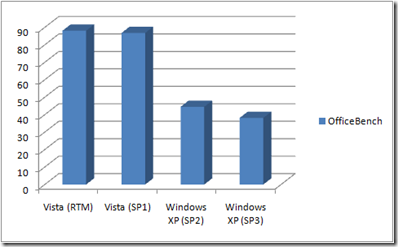 Windows Vista = Windows ME "Reloaded?" You be the judge!