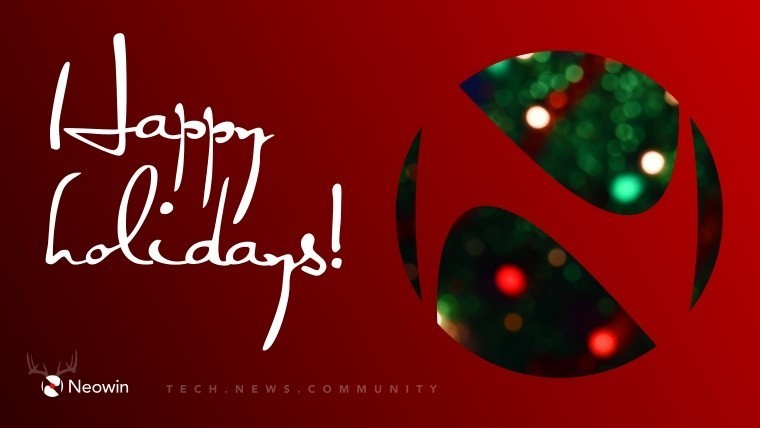 2016 sucked in many ways - well, for most of us anyway - from the deaths of multiple talented artists as well as innocent people through the rise of terrorist attacks across the globe, to Brexit's costly implications and the people who were shocked that their vote actually counted, lets not forget the Samsung Note7 fiasco, and well, has there ever been a stranger US election? People are divided on the outcome of that, so I'll leave it at that.

But as 2016 thankfully comes to an end in just under a week, we at Neowin would like to take a moment to wish all of our readers the very best for 2017 and wish you and your family a very Merry Christmas. And a Happy Hanukkah. And a Happy Kwanzaa. And for those that we missed, we want to wish you a Happy Festivus - a holiday for the rest of us.

We really appreciate the support of our readership, and we'll continue to try and bring you the news fast and hard into 2017 as well. We're kicking off 2017 with on-site coverage of CES 2017; Rich Woods and Timi Cantisano will be there to keep you updated on the tech front. Not long after, we'll be at the Mobile World Conference in Barcelona where Andy Weir will be bringing you all the latest news on the next generation of smartphones.

We're also committing to bringing new features and updates in 2017, so look out for an update on that front. In the past month we have updated the mobile layout of our main page, so check that out if you haven't already, more to come!

But for now, thanks for reading, supporting, and participating at Neowin, and on behalf of the entire Neowin team, have yourself a safe and Happy Holiday!

And one final note

as if 2016 couldn't get any worse... sending all our love to @carrieffisher