Michael Thomasson, the owner of the world's largest video games collection has once again revealed plans to sell it off. 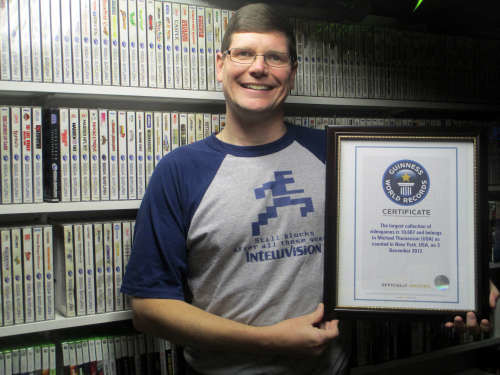 Back in June, Michael started taking bids for his collection in a GameGavel.com auction which reached a maximum amount of $750,250.00 before closing. Now, in an interview with Rawrcade, Thomasson has revealed that he still owns the collection and no further transactions have yet taken place.

The original auction which started in June, ended up with a closing bid of $750,250 within a couple of weeks, but the bidder seems to have delayed the transaction, resulting in Thomasson's change of plans. It has now been revealed that, he is considering to conduct another auction for the collection or even sell it directly to anyone interested and might settle for a lesser amount than that raised in the earlier auction due to his immediate need for money.

Michael's collection which spans over 11,000 retro games still holds the Guinness World Record and was also bid for by the founder of Oculus Rift. As the collection is still with him, enthusiasts with deep pockets can still approach him and acquire a part of gaming history.