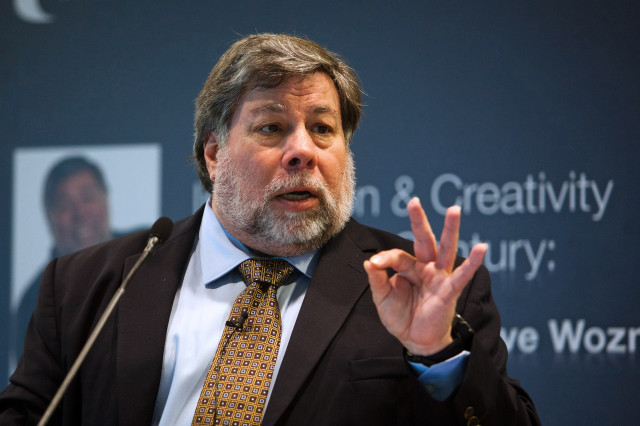 Apple's co-founder, Steve Wozniak, speaking at the Login technology conference in Vilnius, Lithuania made some bold claims about Apple's future. Widely celebrated as the brains behind the company, Woz has often been an Apple critic as of late, offering his slant on most major decisions the company make.

Stock price is a little low right now. Over time I've seen Apple go up or down 2x over a few months.

He went on to talk about Apple's business model, as well as the company's future products:

Apple's business model tends to be new products, even products that didn't exist before and doing well out of them and not remaking the same thing, as eventually that just gets a little bit stale. So I would guess that Apple is very well prepared, and working on new things that are going to surprise and shock us all. And I honestly don't know [what].

Woz then replied to a more prying question about new products:

I gave up trying to guess a long time ago. There can be rumors which are false, or something gets cancelled. I never ask key insiders at Apple what they are about to come out with.

In his speech, the co-founder envisioned a future for us all where the power of computers brought us to "a perfect place of happiness". Woz has been known for his particularly free-thinking views, on occasion playing numerous practical jokes on his colleagues and family.

Apple, now a multi-national corporation, was founded by Steve Jobs and Steve Wozniak in the garage of Jobs' home. In recent years, Apple's share price had seen a seemingly unstoppable rise. Since early 2013, however, stocks have plummeted, recently slipping below the $400 mark.