Microsoft's next update to the Xbox Dashboard has been offered to beta testers, shown off in videos, and very soon it will be open to the public. A recent email from Microsoft has come bearing details about the new update which will begin to be pushed out to consoles on November 1st. 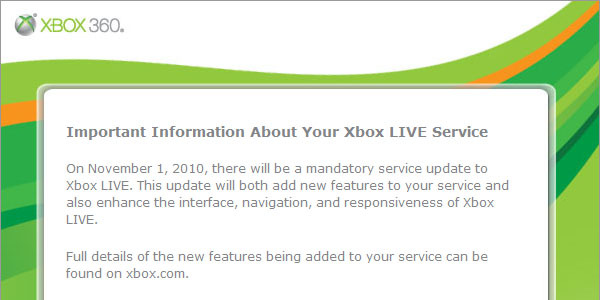 The new update brings the Metro UI to the Xbox 360, creating a flat look, but fluid motions and even spots that appear to "pop." Many Kinect specific features also come, such as all of the configuration information and channels related to the motion-based controller. The update is mandatory, meaning if you decline to update you will lose Xbox Live ability, most likely due to the incompatibilities between the old Dashboard and the new Dashboard like an updated Party Chat. You will still be able to use the offline features of your Xbox 360 however.

Coming with this update are also updates to Zune, Netflix, Facebook, Twitter, Last.fm, and adding the streaming of anything and everything ESPN right to your Xbox. This will bring an on-demand sports coverage to the dashboard. While the email does not mention these new services specifically, the image above which is located at the end of the email certainly suggests that these features will all come with the November 1st update.

With the recent amount of updates to the beta Dashboard, including a welcome tutorial, it is obvious that Microsoft feels very ready to dish out their all new Dashboard. Other basic questions can be answered by referring to the email from Microsoft. Sign into Xbox Live on November 1st to download and apply the update.