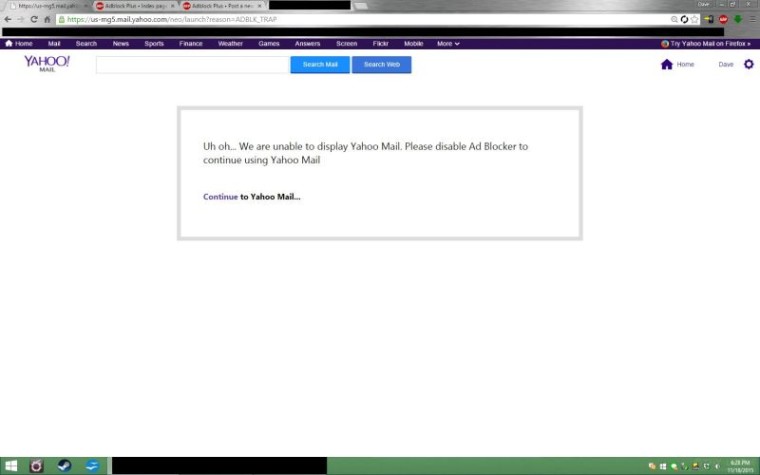 Yahoo is reportedly prohibiting users from accessing its email service if a browser is installed with ad-blocker software.

First noticed by Digiday on an Adblock Plus forum, a user trying to sign on into his Yahoo Mail account via Google Chrome one morning was greeted with what seemed to be a message stating that the user's mail cannot be displayed due to ad-blocking software being present. The message, shown above, is asking the user to disable the program so it can finally proceed with displaying the user's email.

The Yahoo Mail URL displays a "reason=ADBLK_TRAP" message, making it less like an isolated case. Many others in the forum have experienced the same issue, some providing temporary workarounds to keep using the service without sacrificing the ad-block program.

“They’re likely testing this particular approach, banning ad blocker users, on their email service because they know their users will be forced to disable their ad blocker if they want to check their emails within their web browser,” said Tom Yeomans, CEO of Yavli, a company that creates technology that combats ad-blocker software, in an interview with Digiday. “Their users’ email account content are unique to them, so it’s different from news content where they can visit a competing website to get a same or similar experience.”

Back in September, a similar issue was recorded, regarding YouTube's act of making users watch full-length ads if an ad-blocker was installed. However, it was later found to be a bug in the system. While this seemed to be the case, the response we got from our readers just proves how important ad-blocking software is to them.

Commenting on the issue, Yahoo has recently stated that the blocking issue was just a test in an effort to develop "new product experiences", therefore, only some could experience being locked out of their mail.

Source: Digiday via Engadget | Image via Portnoyd on Adblock Plus