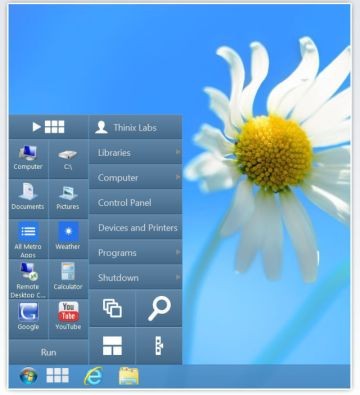 RetroUI from Thinix, one of the many programs that seeks to give Windows 8 owners a way to add a Start menu to its desktop UI, launched a new version just before Thanksgiving. Today, the company announced that it has made available yet another version of RetroUI for download. One of the new features in the 2.2 build of RetroUI adds multi-monitor support, allowing users to access RetroUI on Windows 8 with more than two monitors.

The Enforce feature in RetroUI, which adds a taskbar and Start menu button to the Windows 8 Start screen, has also been improved. Thinix says, "Enforce now offers the option of automatically returning to the classic desktop when (the F4 key) is used to close a Windows Store App." Thinix has also added a new advanced hotkey that can be used to reset Enforce settings.

Finally, the new version has added three more languages (Afrikaans, Hungarian/Magyar, and Turkish/Türkçe), fixed a couple of bugs that have been discovered since the launch of the last version, and added some refined colors and themes for the Start menu. RetroUI costs $4.95, or $9.95 for a license to use it on up to three PCs. There's also a seven-day free trial available. We also want to point out that this program is for Windows 8 only and won't work on Windows RT-based hardware.