But it also has some really cool features. There's a dual-screen experience that switches between an analog (it's an LCD, but Mobvoi is calling it analog) face and a digital screen, saving battery life. It's also thinner and lighter than its predecessor, and it's more stylish.

The TicWatch Pro 3 also comes with its own suite of fitness apps, such as TicExercise. For sleep tracking, it has TicSleep, making it one of the only Wear OS watches tracks sleep. It has TicHearing to tell you if it's too loud where you are, and if that will affect your hearing. There's all of that, and there's more.

The thing about smartwatches is that they're very personal. We'll talk later about that aspect of the functionality, but of course, that applies to design too. As the saying goes, beauty is in the eye of the beholder; it's completely subjective. I really think that for most people, priority number one in a smartwatch is that it will look good on them. 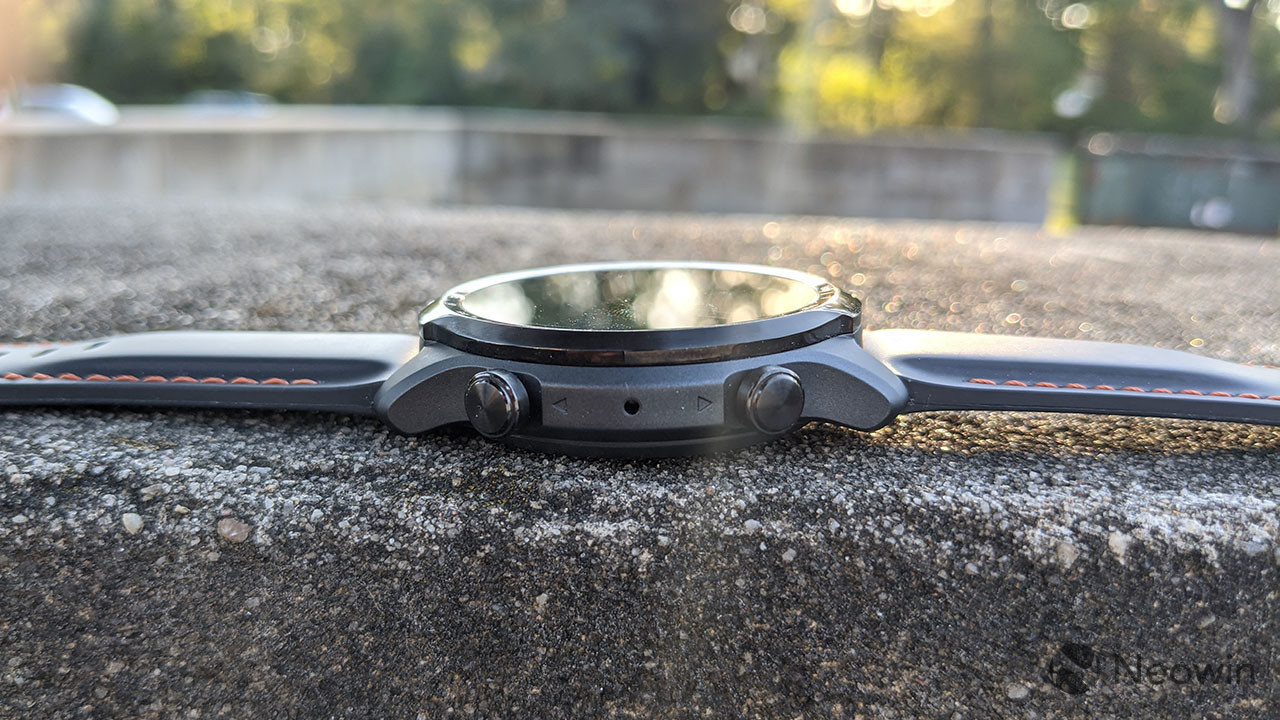 But one thing that I'd say is pretty objective is that a device that's thinner and lighter is more comfortable to wear on your wrist. The TicWatch Pro 3 is 12.2mm thick, so it's not bulky at all, and it weighs in at just 43g, which is super light. With the silicone strap feeling soft to the touch, the whole package is definitely among the more comfortable smartwatches that I've worn, and I've worn a lot.

I don't just want to talk about the strap, even though I'm kind of in love with it and its orange stitching. Still though, you can swap it out for any regular old 22mm band, so if you want to change it up, you can do that. 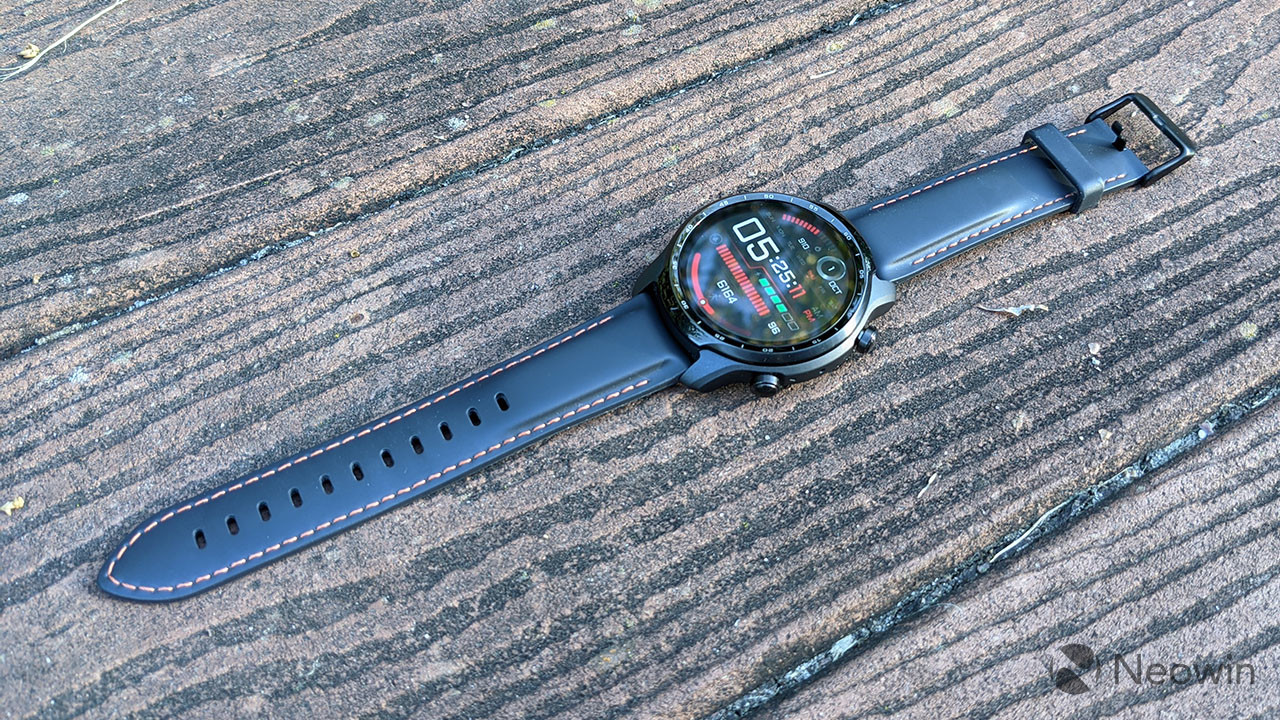 The rest of the watch, frankly, is just about what you'd expect. It's black, made out of a combination of stainless steel and plastic. In fact, most of the chassis is plastic, although the top portion is the stainless steel part. It has a bit of a raised bezel there, and while I personally prefer a flat glass top, a raised stainless steel bezel has its advantages. For example, if you hit the watch against something, it's less likely to impact the glass.

It also has two buttons on the side. The top one acts as a home button, or it can take you to the app drawer from the home screen. As usual, the bottom button is customizable, and it defaults to the TicExercise app. Holding the top button launches Google Assistant, and holding the bottom button acts as a power button. 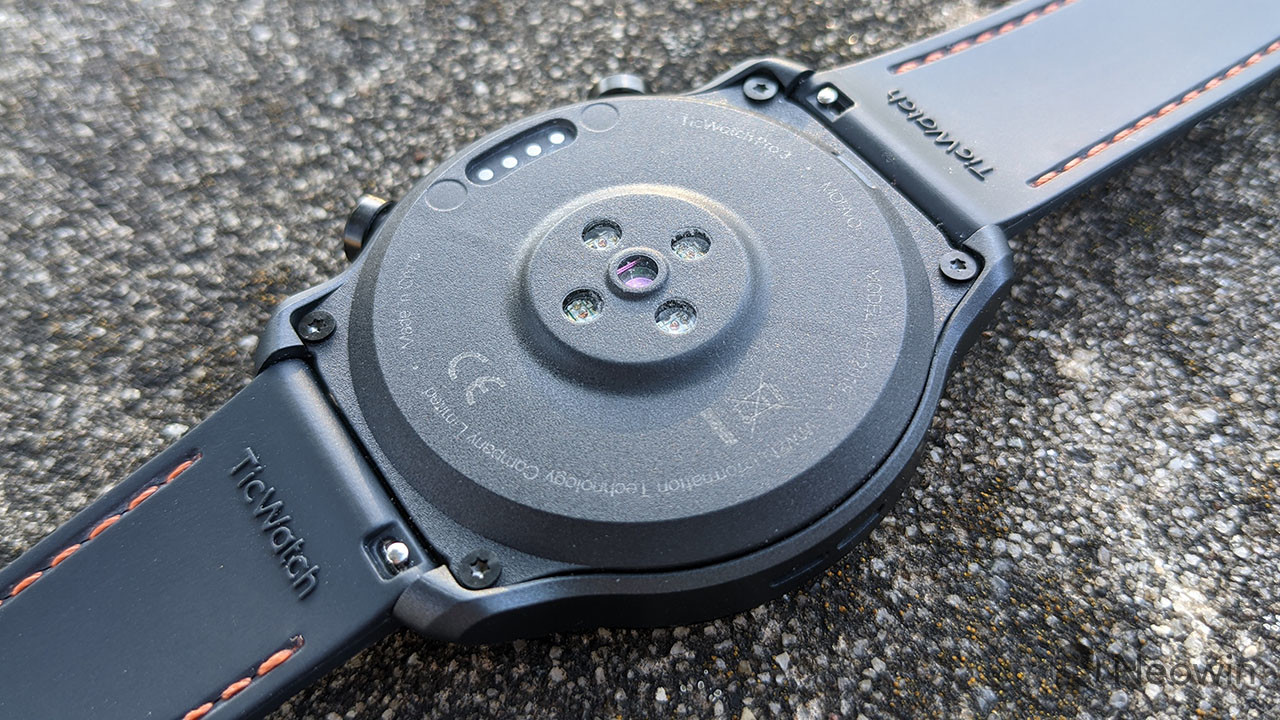 The bottom is, of course, plastic. Naturally, you'll find a heart rate sensor down there, and you'll also find pins for charging. This is one area where I always criticize smartwatch vendors that don't use wireless charging. If you use this device frequently, you're going to sweat under it, those pins will get dirty, and charging it can become a pain point.

Normally when I write a smartwatch review, I lump design and display into one category, since there usually isn't much to talk about on such a small screen. In this case though, the screen is one of the things that makes the TicWatch Pro 3 unique. It uses dual-layered screen technology, and basically, that means that it has two screens. 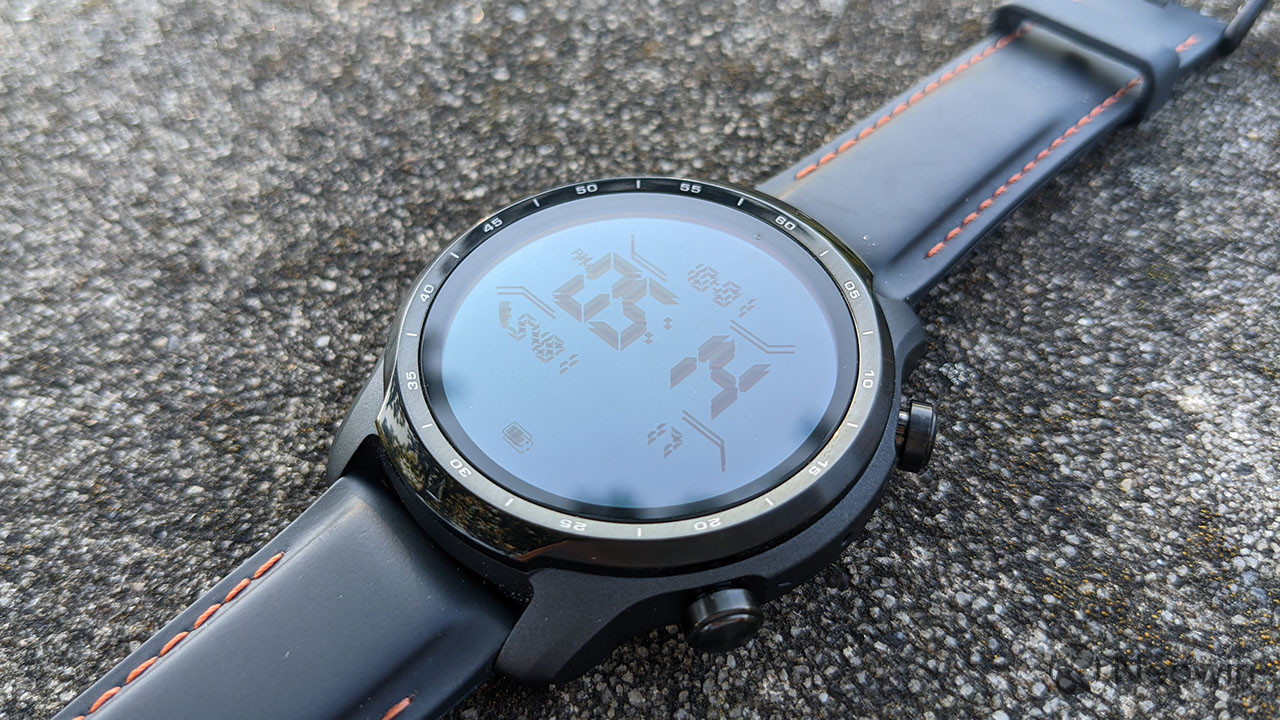 One screen is the regular digital screen that you'd expect from a smartwatch, and the other is an analog display. It actually caught me off-guard when I first saw it, even though I was briefed on the product, but the watch actually just looks like a dumb digital watch. If you don't have raise-to-wake set, it even has a backlight like an old-school Timex.

What's cool about this, of course, is that it improves battery life greatly. With this feature enabled, I was easily able to get two days out of the TicWatch Pro 3, and that is an absolute record for any Wear OS watch with me. The analog display is quite an innovative way to actually make it practical to turn off the always-on display. And yes, if you hate the analog display, you can just go and turn on the AoD. 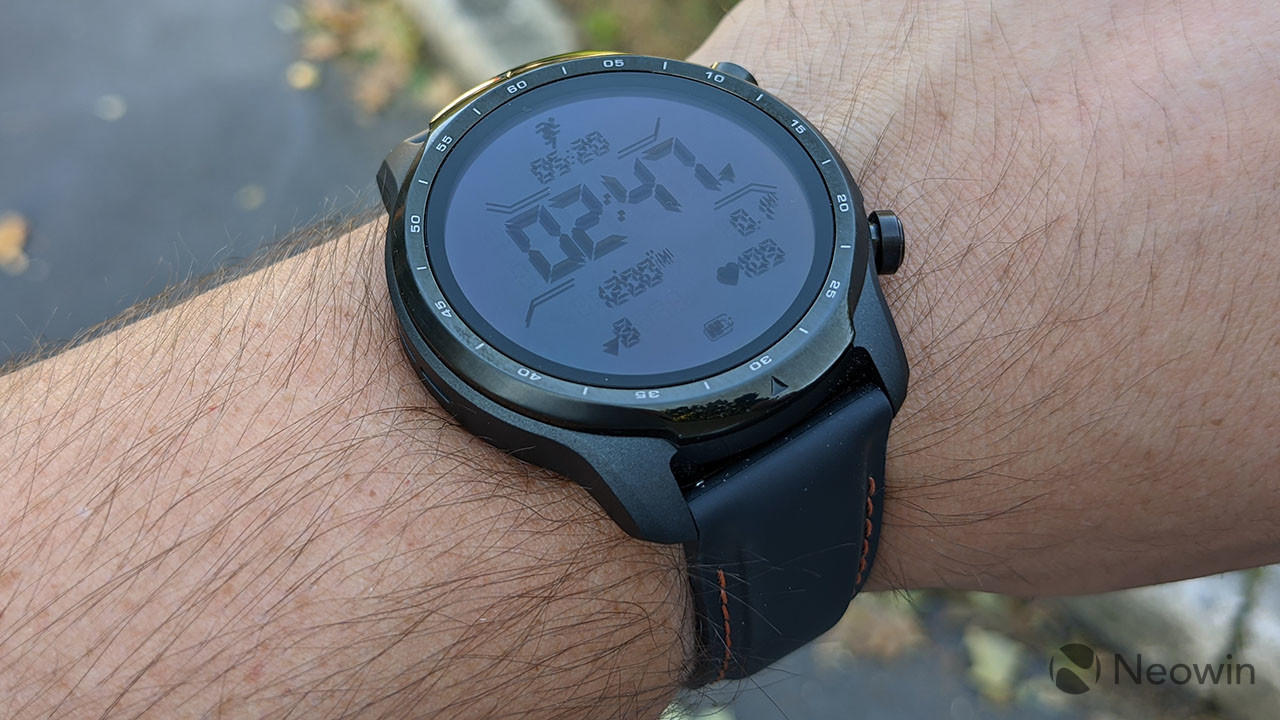 But that analog screen isn't just for seeing the time and date. It's useful when you're doing other things, like exercising. It shows your heart rate, distance, time you've been exercising, and more. It's pretty awesome.

Other than that, the regular digital screen is fine. Like I said, this is usually the part that I lump in with the design section, because there really isn't much to say. It's a 1.4-inch AMOLED 'Retina' display; the resolution is 454x454, which is good. It's pretty because it's AMOLED, and there's no visible pixellation.

The performance of the TicWatch Pro 3 is what makes it the best Wear OS smartwatch on the market, because it's the first device to use Qualcomm's shiny new Snapdragon Wear 4100 platform. But first, let's look at some history.

Android Wear, which has since been renamed to Wear OS, debuted in 2014. The Samsung Gear Live and the LG G Watch were the first devices to launch, although Motorola's already-announced Moto 360 would come later. Both the Gear Live and the G Watch used a Snapdragon 400 processor, a low-end chipset that was made for phones. Obviously, Snapdragon Wear didn't exist yet because the smartwatch category was only being developed. 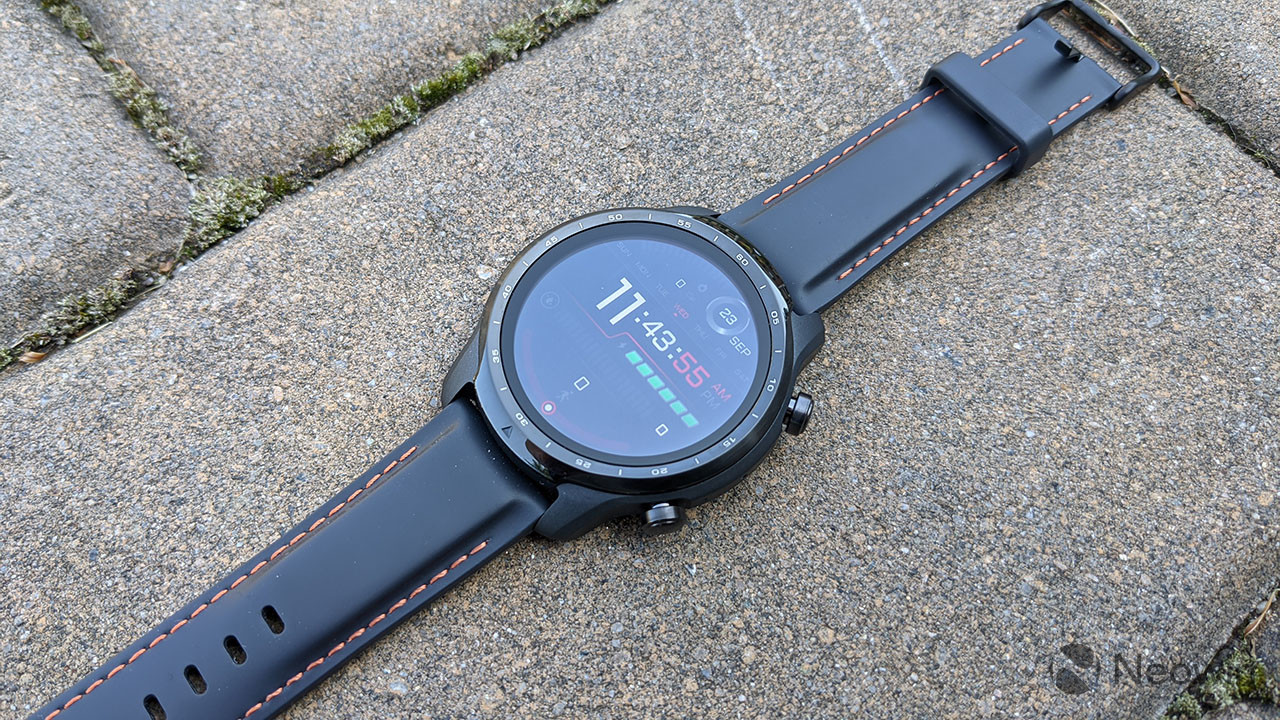 Still Cortex-A7, the Snapdragon Wear 3100 delivered some key innovations, such as Qualcomm's new big-small-tiny architecture. This allowed for better power management, letting the watch do trivial background tasks without sucking down battery, and it allowed for motion on the AoD, colors on the AoD, and more. But still, overall performance hadn't really changed, because the architecture hadn't changed.

Then came the Snapdragon Wear 4100 in June, which is actually based on Cortex-A53, marking it as the first fundamental improvement in Wear OS hardware in over six years. During that time, companies like Apple, Samsung, and Huawei were able to skip ahead of their Google competition. 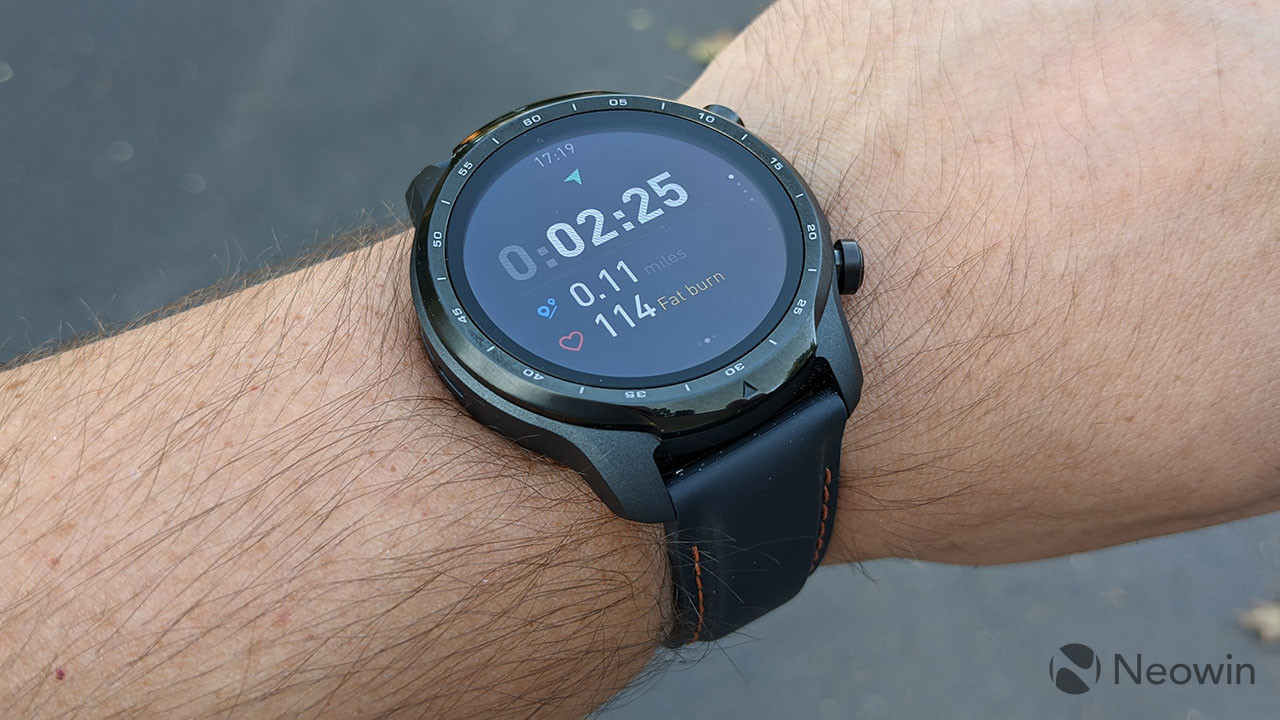 And let me tell you; this thing is fast. With the previous generation of Wear OS watches, I had plenty of performance issues, but I had to accept it for what it was. If you wanted Wear OS, there was simply nothing better, so I focused on style and such. Now, there is something better. With a Cortex-A53 processor combined with a Wear OS update from Google that's supposed to make things faster and more responsive, this thing is fantastic.

To be clear, I don't know how much of that is due to the Wear OS update. None of my other Wear OS watches have received it, and as far as I know, it's just on the Suunto 7 right now.

Battery life is pretty great as well. Mobvoi promises up to 72 hours, and that's probably true. I had no problem getting a solid 48 hours out of it, which is better than any Wear OS watch that I've seen, but then I always charged it. Frankly, you don't want to a smartwatch to get low on battery because it starts trying to force battery saver features on you, and most of all, you don't want a dead smartwatch on your wrist.

I say this often, but a smartwatch is a super personal device. We talked earlier how that applies to design, but it also applies to functionality. There is no one size fits all (or most) like with PCs or smartphones. With a PC, I could take about 95% of users and recommend that one with a Core i7, 16GB RAM, a 512GB SSD, and the best display. For smartphones, I can recommend to 95% of users the one with the best camera, a great screen, a Snapdragon 865+, and the most RAM and storage. 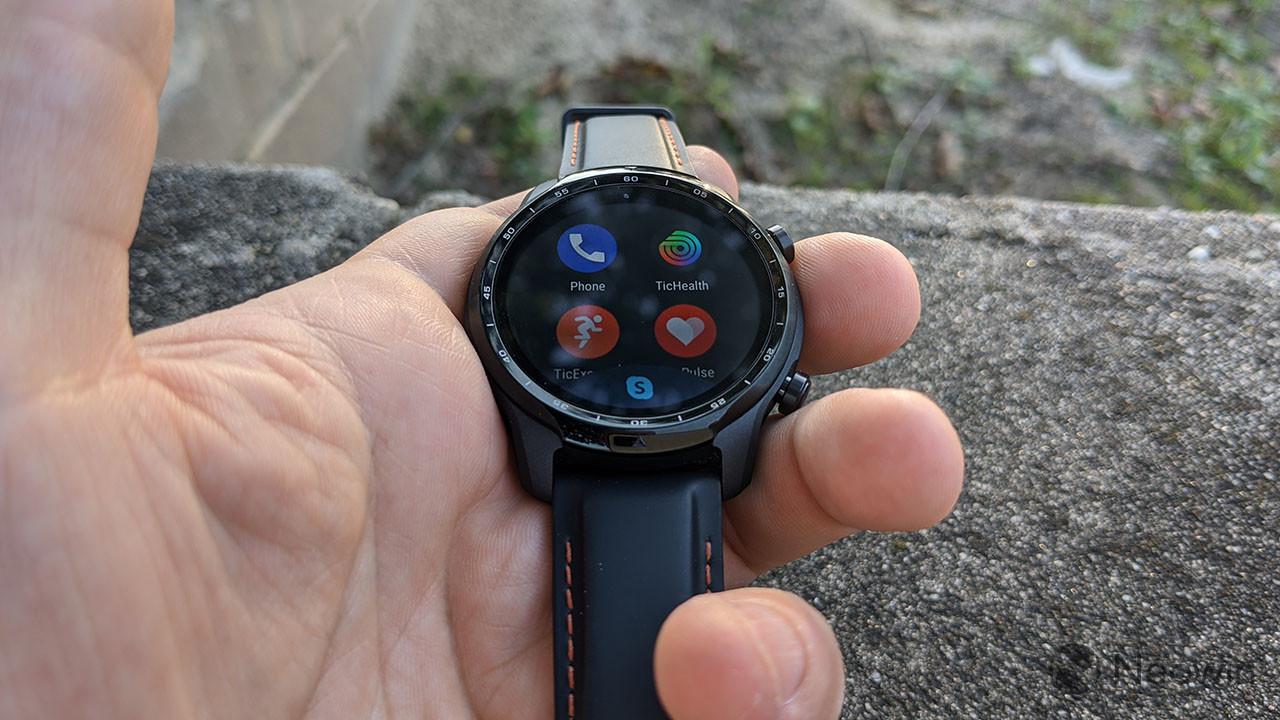 The TicWatch Pro 3 ticks (yes, I went there) all of those boxes pretty well in a way that no other Wear OS watch that I've seen can. Normally, Wear OS is great for interactive notifications and a rich app ecosystem, but it suffers in battery life and fitness tracking. However, thanks to the dual display technology, the TicWatch Pro 3 has the best battery life I've ever seen on a Wear OS watch.

Most of these are pretty self-explanatory. TicExercise is what you can use to track your workouts, and TicSleep tracks your sleep. TicZen helps you to calm down, TicHearing tells you if it's too loud, and so on. Any of these apps will show you progress on the watch; for example, TicSleep will tell you how you slept last night.

But the TicHealth app is more or less a hub for everything. Honestly, I'm not even sure that it needs to exist with the smaller bits of information in the individual apps, and you can get the same information from the Mobvoi app on your phone. It does have a sort of three-ring approach like Apple uses, counting active hours, exercise minutes, and steps.

Another thing you'll find in the Mobvoi app is a watch face section, which offers hundreds of watch faces that you can easily download and use. The bad news is that they're not searchable, so you just have to browse for the ones you want.

The TicWatch Pro 3 is an excellent all-around smartwatch. It's comfortable to wear, and it's quite good at what it does. Part of this is because of the Snapdragon Wear 4100 chipset, which is the first major improvement to Wear OS hardware since the platform was introduced in 2014. Another part of it is the dual-layer display technology that lets it act as an analog watch when you're not interacting with it, boosting battery life beyond what you'd expect from Wear OS. 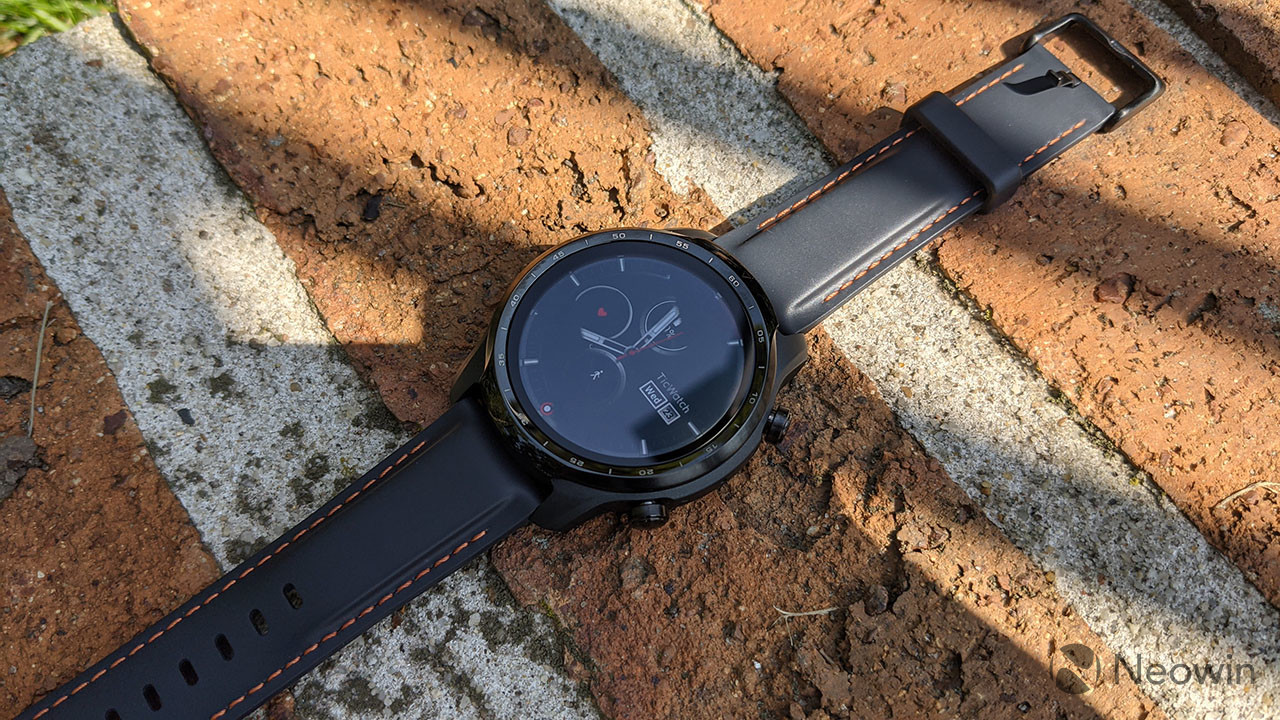 I really only have two issues with it. One is that there's no 4G LTE, something I'd like to see in a future iteration. The other is that it uses pin charging instead of wireless charging.

The TicWatch Pro 3 is both stylish and comfortable. It's thinner and lighter than its predecessor, and it feels good to wear. As I mentioned, it really does tick the right boxes, with health tracking in the Tic apps being much better than Google Fit, and hitting the right marks with performance and battery life.

You can check it out on Amazon here, or you can find it on Mobvoi's website here.