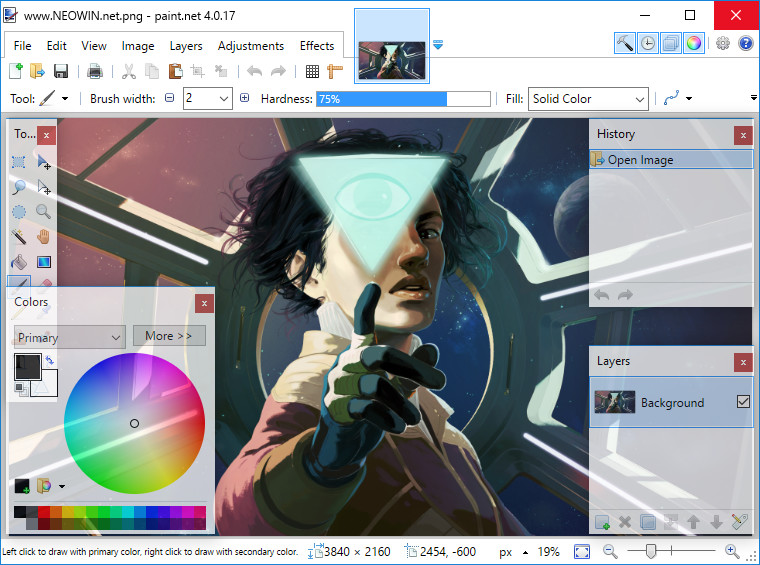 This update has two main changes: a big improvement for startup performance, and availability on the Windows Store. The “Classic” release is still available, of course, and will continue to be updated and maintained on roughly the same schedule as the Store release.

The Store release of Paint.NET is not distributed free-of-charge. The “Classic” release will still be available and kept up-to-date on the same schedule as the Store release.

The standard price is currently $8.99, but right now is on sale for $5.99 until the end of October. You can also make use of the 30-day free trial to get started.

There are some important advantages that the Store release comes with:

Automatic background updating. Now whenever you launch Paint.NET it will definitely be the latest version. No more procrastinating the update because you’re already busy with other stuff. The Classic version checks about once every 10 days for updates, so if you move to the Store release then you’ll probably have updates several days sooner than usual (on average).

Easy Installation. The second advantage is that, once purchased, it’s really easy to get Paint.NET installed onto any new device from the Store” app in Windows 10.

Reliability. The Paint.NET installer and updater are based on Windows Installer (“MSI files”). Over the years this has proven to be an unreliable foundation. The problem goes away completely with the Windows Store release because of the way the package manager and application model works.

Plugins are supported for the Store release. You just have to install them in a different location. Go to your Documents folder, create a folder called “paint.net App Files” (no quotes though), and then create a folder for each plugin type: Effects, FileTypes, and Shapes. And then put your plugins into each folder just like you’re used to with the Classic release. This does mean that plugins are installed per-user, mind you.