Earlier today photos of RIM's new BlackBerry PlayBook tablets appeared on the Vietnamese forum Tinhte.vn. RIM was planning to release new tablets later this year, but this is the first time we're seeing physical proof. The photos show a brand new 10" model and an updated 7" model including 4G (assumed to be LTE). Surprisingly enough, the new 10" PlayBook's display doesn't have the same aspect ratio as the 7" tablets. For the first PlayBook RIM chose a 16:9 aspect ratio (like most Android tablets), but for the 10" model RIM is using a 4:3 aspect ratio, like the displays Apple uses for the iPad. 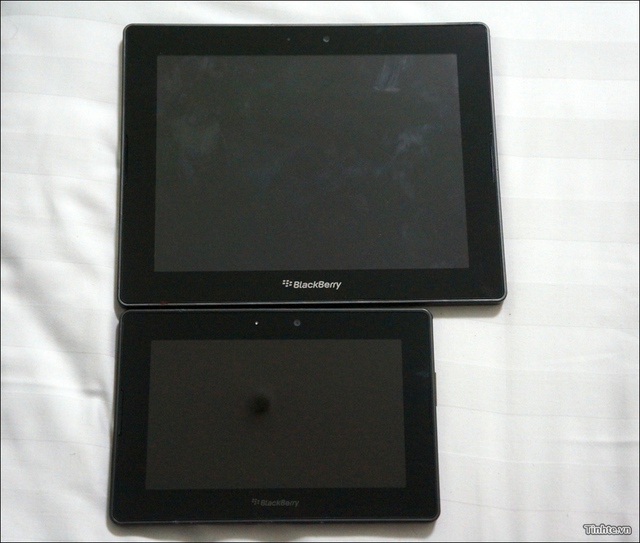 Besides the display, there doesn't seem to be any difference in design between the new 10" and 7" 4G editions and the original PlayBook. All three of them feature a camera on the back and another one on the front for video chat. RIM also retained the flat and minimalistic design. The only difference seems to be that the BlackBerry logo on the front of the 10" tablet is now reflective and a lot more visible compared to the subtle grey logo on the 7" models.

It's impossible not to wonder how Apple will feel about the 10" PlayBook. From the front the iPad and 10" PlayBook look very similar - mostly because they share the same screen size, aspect ratio and black bezels. The sides and back of the PlayBook are quite different though. 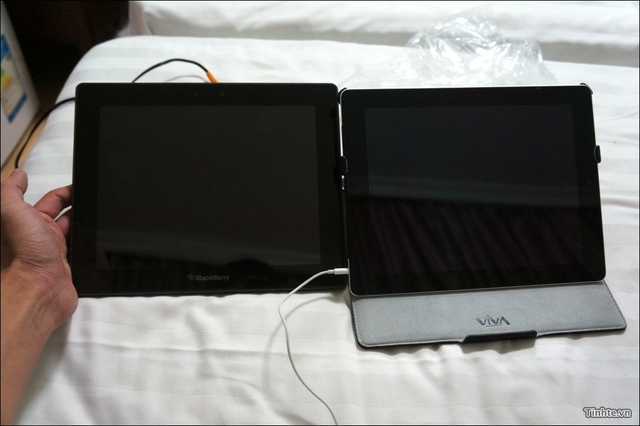 The pictures of the insides of the 10" model also reveal the battery capacity to be 26,82Wh, which is not far off the battery capacity of the iPad 2 (25Wh). The current 7" Playbook is powered by a 20Wh battery, but the new 4G edition of the 7" PlayBook will have to do with 17,76Wh instead. Considering the 7" edition wasn't stellar in battery life with the 20Wh battery, we hope this means RIM has optimized the software to at least retain the same battery life with the newer (and smaller) battery.

That brings us to an unanswered question: what operating system does it run? While the current version of PlayBook OS 2.0 isn't all that bad, it can be expected that RIM will launch their new tablets with BlackBerry 10. Recent reports from RIM stated that the first devices running BlackBerry 10 have been delayed to Q1 2013, though. Originally these devices where still supposed to hit the shelves in 2012. Launching them with an updated version of PlayBook OS 2.0 and updating them to BlackBerry 10 later on wouldn't be impossible (the original PlayBook is getting an update to BlackBerry 10), but it might not be the best decision for RIM. The current PlayBook didn't sell all that well before receiving serious price cuts, and without new software these new tablets might not appeal to many. But without an official announcement from RIM, all we can do is wait.