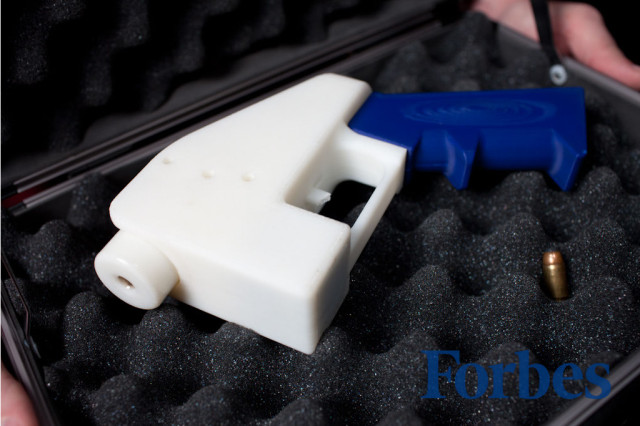 We found out today that you’ll soon be able to walk into a Staples store and buy your very own 3D printer for the low cost of only $1,299. As prices get cheaper on these devices, more and more people will be able to use them to create unique and exciting things from concert flutes to edible food shapes to cases for smart phones to… guns?

It looks like people will soon be able to print their very own firearms from the safety of their own home. Forbes reports that Cody Wilson, the 25-year old who founded the non-profit group Defense Distributed, has created 16 different design elements that, when combined, form a fully functional gun. The only non-printed piece is a nail used as a firing pin and a six-ounce chunk of steel that’s put into the body to ensure that it remains legal. The non-profit organization has also obtained a federal firearms license so that the creation of the printable guns is 100% legal for them.

While many may decry the work that Wilson is doing, it’s something that someone would have completed it at some point in time. Congressman Steve Israel is attempting to put the genie back in the bottle by asking for new laws on printable weapons, but the simple fact of the matter is that making a law banning plastic guns is not going to make anyone any safer. Wilson made a good point when he said, “Everyone talks about the 3D printing revolution. Well, what did you think would happen when everyone has the means of production?”

The plans for the printable gun are expected to be posted online to Defcad.org in the near future.