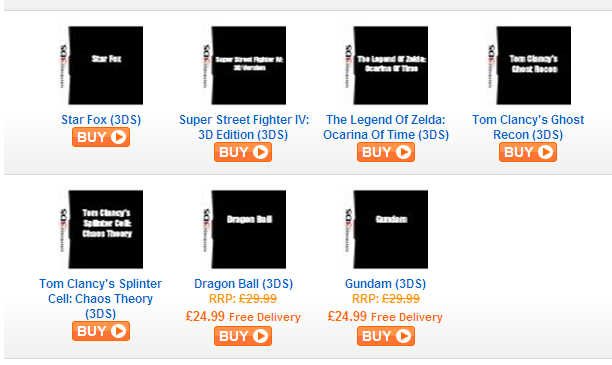 The Nintendo 3DS is breaking new waves when it comes to mobile handheld gaming. While there has been a lot of hype around the device, one detail has yet to remain unveiled, how much are the games going to cost?

Play.com has posted up what appears to be pricing for the upcoming games. They currently list two titles at £24.99 (about $40.00 USD). While some may quickly write this off as a place holder, Play.com actually does have place holders without prices.

As such, it is a safe assumption to make that the games will command a premium, much like an analyst had expected. While there is certain reasonable expectation that these games would ask a higher MSRP when compared to games on mobile platforms, such as those on iOS, the real question is, will consumers pay the price?

The 3DS does offer a lot more than the iOS platform, so it’s expected that the games will be more expensive. But when the iOS has a typical $20 max price for games, do people (parents) really want to pay upwards of $40 per game on a mobile device? Yes, there will be a certain amount of hardcore enthusiasts that purchase the games, but $40 is creeping in close to the game prices of the Xbox 360 and Playstation 3.

Thanks for the tip Sylar2010