BGR's sources over at Verizon have stumbled upon some interesting additions to the company's mobile line up. As reported by BGR, Verizon is set to have a busy fall/early-winter Android season with a flurry of new devices to hit the shelves starting in November. 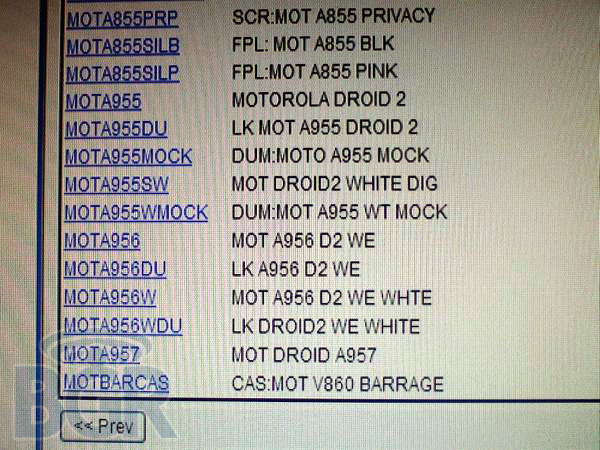 Although the Verizon insider had let slip that the company would be shipping the Droid Pro (A957) and a possible Motorola slab phone (potentially tablet), there had been no confirming details as to when, or whether or not the source had data to back up his claims.

The Motorola Droid Pro, with its blazing 1.3Ghz processor and four-inch screen is set for launch in November. The screen caps provided by BGR don't stop there, listing multiple new devices. Also spotted were not only black but white versions of Moto's Droid 2 (A956) device, and the aforementioned slab (possibly tablet according to BGR). It looks like Verizon is planning to ship the World Edition (WE) of all the aforementioned devices and if they remain unmolested, this will be a huge plus for customers. This combined with Verizon's goal of 75% LTE coverage by 2012 will make for an exciting few quarters.