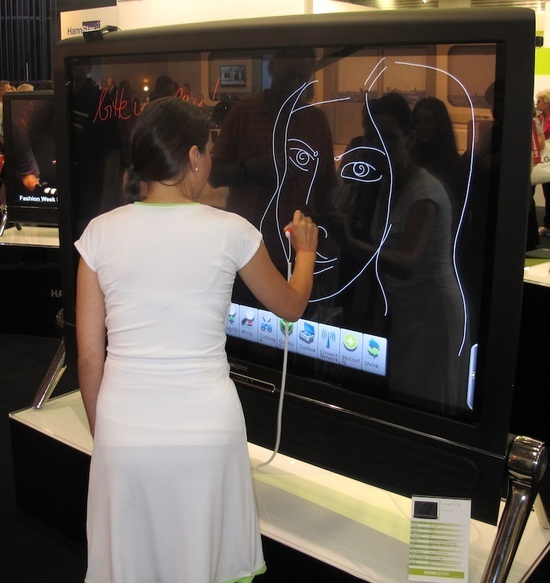 It's nothing new to see a company attempt to bring the PC and the television world together in terms of hardware. We have seen all-in-one PCs that have the parts inside a monitor. We have also seen media center PCs that hook up to larger HDTVs. But now one company is working on a prototype product that creates an all-in-one PC on a truly massive scale. As reported by Dvice.com, the German company Hannspree showed off the Lounge TV 70 at this week's IFA trade show in Berlin.

The product shown at Hannspree's booth was a massive 70 inch 1080p HDTV that also had a PC running inside it with Microsoft's Windows 7 operating system. Once more, the TV was running some kind of business application that allowed people to "draw" images on the huge TV screen. It basically turned this TV-PC combo into a whiteboard product as well. The story speculates that this kind of product could be used by businesses for high end presentations in conference rooms.

The report did not have any information on the hardware specifications of the PC parts inside. In the past all-in-one PCs tend to have hardware that's on the lower end of the scale. However, we would love to see a high end PC merged with a big screen TV like this for gaming. There's no word on pricing for the Lounge TV 70 nor any indication of a release date. It's possible that this TV is being made just for the German market.