Microsoft's most affordable Windows Phone, the Nokia Lumia 530, has been falling to ever-lower price points, but it's truly a barebones device with entry-level specs.

But Microsoft has now dropped the Nokia branding, and slapped its logo onto a new device in the same low-end 500-series of its range. The Lumia 535 is much larger, clearly - but how else does it compare to the 530? Let's check out the spec sheets of the two handsets:

There are, evidently, many similarities between the two devices. Both feature the same quad-core 1.2GHz Snapdragon 200 chipset, and the two share the same connectivity options. Both handsets also feature on-screen Back, Start and Search 'soft buttons', and each lacks a dedicated hardware button for the camera.

But in many respects, the Lumia 535 is noticeably superior to the 530. For example, the most obvious difference between the two handsets is their size - the 535 offers a large 5-inch IPS LCD, while the 530's screen is much smaller at just 4-inches.

More significantly, though, the 535 also gets a qHD display - it's a higher resolution than the Lumia 530's FWVGA (854x480px), but it's not quite high-definition; at 960x540px, qHD resolution is one quarter that of Full HD. The increase in resolution on the 535 is matched by a corresponding decrease in pixel density versus the 530, however, due to the size difference - the Lumia 535 offers 220ppi, while the 530 gets 246ppi.

That's not the only area in which the 535 bests its cheaper sibling by any means. The device also has 1GB of RAM (against the 530's 512MB) and gets 8GB of storage - the same as the even more costly (although slightly smaller) Lumia 630 and Lumia 635. 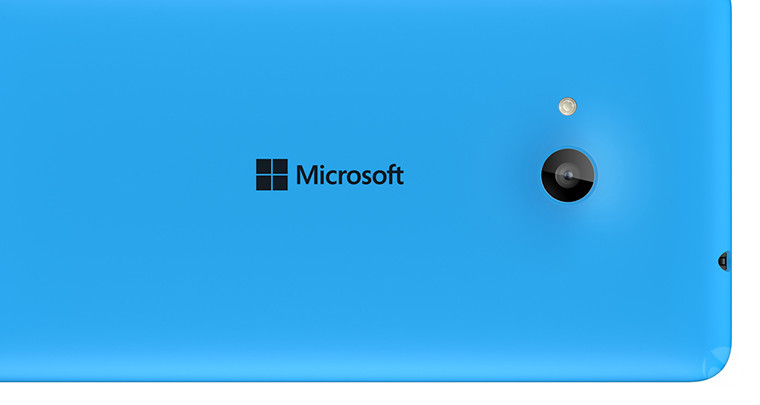 But where the Lumia 535 really stands out against the 530 is in the camera department. For a start, it's got a front-facing camera - and in that respect, it's not just better than the 530, but the 630/635 too, which both lack selfie cams. In fact, the 535 gets a front camera with a whopping 5MP sensor - that's the same megapixel count as the front cam on Microsoft's 'selfie phone', the Lumia 735. However, the 535's front shooter is more limited in its abilities, thanks to its fixed focus.

The 535's battery is a good deal larger than the 530 too (1905mAh vs 1430mAh) - essential to fuel the bigger screen - and the new handset also comes with the very latest OS version, Windows Phone 8.1 Update 1, and the newest Lumia Denim firmware. The 530 will be updated to this eventually - but exactly when that will happen remains anyone's guess.

The 535 is an unusual new offering from Microsoft - not so much because it is superior to the 530, but because in many ways, it also beats the 63x devices which should, in theory, sit further up the range.

In some ways, one has to wonder if the 535 would have been better released as the Lumia 630/635, since the 535 seems like a more logical and significant step up from the Lumia 530 in numerous regards, compared with the 63x, which now offer nothing of consequence over the 535, with the exception of the higher-rated Snapdragon 400 chipset.

The Lumia 530 represents the ultimate expression so far of value in Microsoft's Windows Phone range. When it was first unveiled, Microsoft set the 530's price at €85 EUR / $115 USD / £60 GBP, off-contract and before taxes and subsidies. Since then, prices have fallen in a big way.

In the UK, the device can be purchased for only £50 GBP on pay-as-you-go; in the US, it's available on Cricket Wireless for the astonishingly low cost of just $49.99; in Australia, prices have dropped to as little as $39.50 AUD; and there have been other promotional discounts, such as a buy-one-get-one-free offer in the United Arab Emirates.

The Lumia 530 represents Microsoft's play for the most price-sensitive buyers, those that seek a simple smartphone experience that covers all the basics with no bells or whistles on. That's an appealing prospect for a huge number of potential buyers - some buying their first smartphones in emerging markets on modest incomes, others perhaps upgrading an old 'dumb phone' to a smartphone for the first time, and seeking an affordable introduction to the world of apps and smart devices.

But it's not for everyone. There are some who seek an affordable device with just a few bells and whistles on - luxuries like a flash for the camera, or a selfie cam, or a half-decent amount of storage, or a large display. It is these buyers that Microsoft is courting with the Lumia 535 - those with limited budgets, but who don't want to be stuck with the absolute bottom-of-the-range handset, and are happy to pay a small premium as long as they see enough value from it.

The Lumia 630 isn't an entirely convincing upgrade over the Lumia 530, mostly because of the things that it's missing, like the LED flash and the front-facing camera. The 535 offers these features, and more - including the larger, higher-res display, more RAM, larger battery, more storage and more colour options available.

Given that Microsoft is targeting those buyers who are watching their pennies most closely, the Lumia 535's success may well depend on how quickly prices fall - with local promotions, discounts and carrier subsidies - to narrow the gap with the 530, and present the 535 as a worthy, but affordable, upgrade over the cheaper device.

So, the Lumia 535 seems to make a lot of sense, although its positioning in Microsoft's range is perhaps where valid questions can be raised. The launch of the 535, which will go on sale this month, is less of a threat to the Lumia 530, and more troublesome to the Lumia 630, which now appears to offer very little over the 535 to justify its higher price tag.

The Lumia 635, at least, offers 4G connectivity, which the 535 does not - but the 635 costs a good deal more in many markets than its ultra-affordable $79 price tag in the US. In many emerging markets, of course, the 535's lack of 4G LTE connectivity isn't really an issue, as 4G networks themselves are still in their infancy, if they exist at all.

Still, we'll have to wait until we can get our hands on the Lumia 535 to assess whether or not it represents a true step-up over the 530 - as well as how it compares to the 635 - but we're certainly looking forward to test-driving the first handset to be launched under the Microsoft brand.