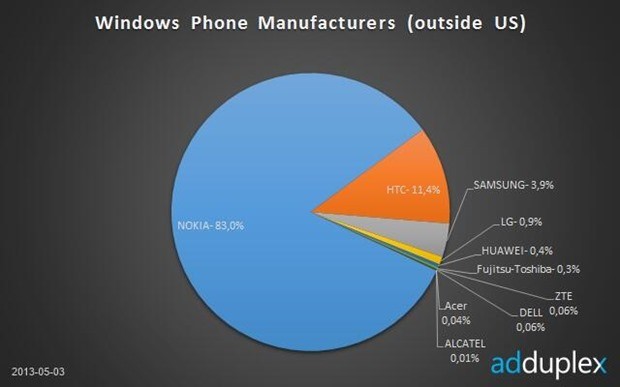 According to a chart from AdDuplex, pulling the latest data from their network for May 3rd, Nokia is holding strong in the Windows Phone market, claiming a lead of 83% in markets outside the United States. HTC are coming in second with 11% of the market, followed by Samsung with 3.9% and LG with 0.9%; other OEMs filled out the remaining percentages with shares less than 1%.

It's not surprising to see Nokia doing so well in the Windows Phone space outside the United States, as they have a large amount of devices on the market filling out a range of price points. The Lumia 920 is their high-end device, but there's also the Lumia 820, 720, 620 and the Lumia 520 available for purchase, depending on the money you're willing to spend.

Although AdDuplex didn't release statistics for the USA, its been traditionally hard for Nokia to break into the North American market, and it wouldn't be particularly surprising if HTC had a stronger foothold in the region. However, Nokia are targeting the lower end of the market with the recently released Lumia 521 on T-Mobile, available for just $150 off-contract, so Nokia's market share could increase as people opt to buy the cheap smartphone. 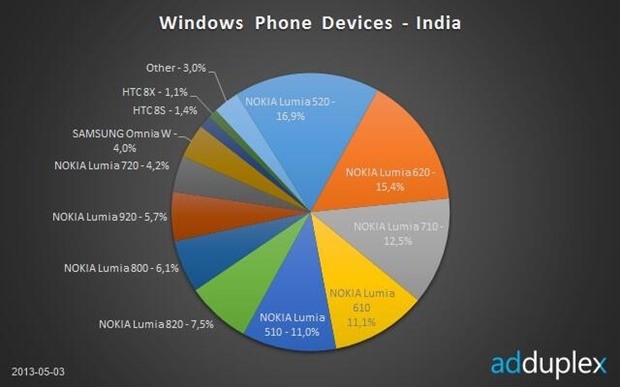 AdDuplex has released another chart that highlights the market share of different devices in India, and surprisingly the ad network is seeing the Lumia 520 as the most prolific device with 16.9% of the market. The Lumia 520 was only released last month, but clearly the cheap price point is very attractive to buyers in the emerging market.