The Nokia Lumia 928 is perhaps the worst-kept Windows Phone secret of all time: we've seen full device renders, we've heard about the phone's specifications, we've heard about the supposed launch dates, we've seen photo samples and even spotted it filming in the wild. Despite the fact Nokia still hasn't announced the device, a billboard has reportedly been spotted advertising the device in the wild. 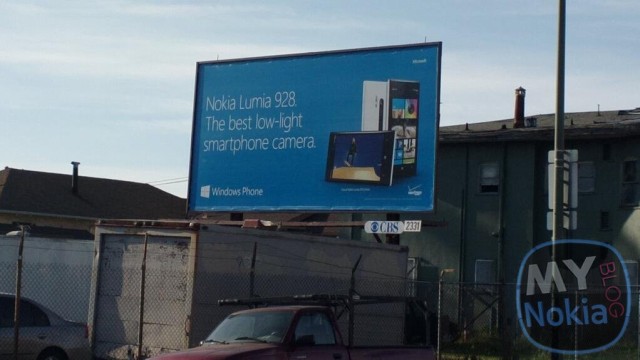 My Nokia Blog has received an image of the Lumia 928 billboard, which shows a render of the device that's different to what we've previously seen, as well as a line that claims it's the "best low-light smartphone camera". You can spot a number of logos around the billboard, including Microsoft, Windows Phone and Verizon, and it doesn't look like the image has been faked.

If billboards advertising the Lumia 928 are already being prepared, it's only a matter of time before the device is finally announced. If previous rumors are correct, we should be seeing a variant of the Lumia 920 for Verizon, likely with a thinner and lighter body, 4.5-inch AMOLED display, and a Xenon flash to accompany the 8-megapixel PureView camera with optical image stabilization.