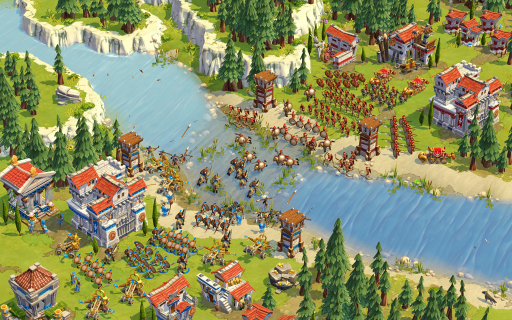 Microsoft's first PC exclusive game in several years, the upcoming Age of Empires Online, now has a more specific release date. Eurogamer reports that the free-to-play RTS game from developer Gas Powered Games (and based on the classic PC series created by the now shut down Ensemble Studios) will officially launch sometime this autumn. While the game is designed primarily as a downloadable online only game, the story reports that there will now also be a boxed retail version of the game released to brick and mortar stores.

The story quotes Microsoft's producer Danan Davis as saying that the decision was made to offer a boxed copy of the game for business reasons, saying "There are some players that still want to go down to the store and buy a retail product." The boxed version of the game will likely come with a "pro premium civilization" upgrade that will let players get access to one of the game's two launch civilizations (Egyptian and Greek) but boosted up to level 20. The retail version will also likely have some exclusive in-game items.

The article claims that the retail box upgrade will be marketed more for the hardcore RTS players than the more casual players that will likely try the game first via its free-to-play modes. Pricing for the retail booster pack will likely be between $5 and $20. Microsoft plans to announce a more specific release date for Age of Empires Online by the end of May, according to the report. It will be Microsoft's first PC exclusive game in several years. Next week, Microsoft plans to release a PC port of its Xbox 360 RPG Fable III to stores and online. The last PC game, exclusive or not, from the company was the PC port of Gears of War way back in December 2007.