Apple may have dominated the digital music sales world since MP3 became a household name, but Amazon is clearly ready to compete with Cupertino. Preempting Google’s attempt at implementing a similar idea in its own Android OS, Amazon released Cloud Drive, a cloud storage platform that lets you upload music (as well as any other file format) and stream that music to any internet-connected device. While this, in and of itself, is not much, the Android app that works with Cloud Drive, Amazon Cloud Player, is the real kicker.

While there have been a few services in Android’s past that have offered these types of services, only some were free, even fewer were cloud storage based, and none of them had the music catalog and digital sales clout that Amazon currently enjoys. While being the only real competition to Apple’s iTunes digital music sales platform, Amazon only has 13.3% of the digital music sales space, and a product like this could really start another upward trend in that number if successful. 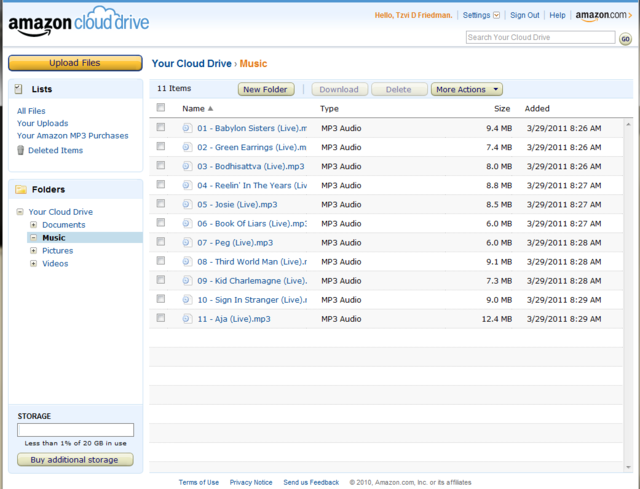 The service itself is strikingly easy to set up. If you have an Amazon.com account, you simply login, and you’re good to go. You can upload anything, from music and video to pictures and documents, in a simple and easy to use uploader. The first five GB are free, and then there annual rates for various levels of storage space. You can organize your files any way you like, and the Amazon Cloud Player automatically sorts your music via ID3 tags. There is playlist support, as well. It’s all laid out very nicely, and your available and used space is shown prominently in the bottom left corner. 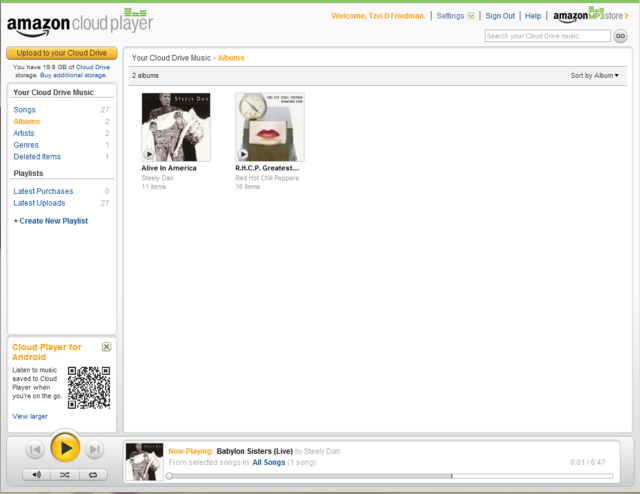 The website clearly wants you to download the Android implementation of all this, and provides a QR code to easily navigate to the install link. The Amazon MP3 app isn’t just a shell to stream music, however. It is easily one of the best looking media players on Android to date, and it provides the same functionality you’d expect from a dedicated media player without the Amazon Cloud features. You can easily switch from your local library to your Amazon cloud library using a toggle on the main page. 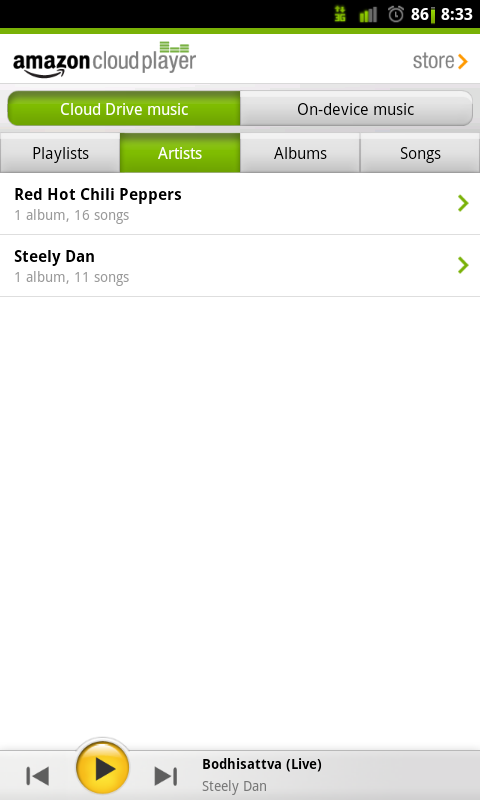 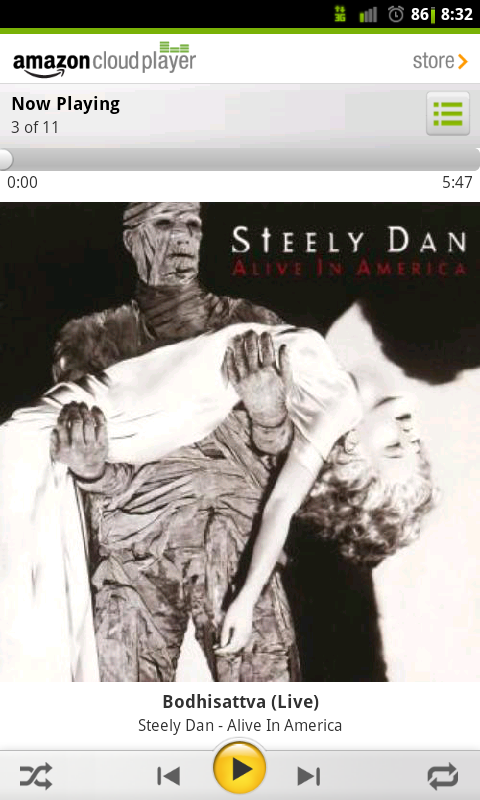 As this is the first released version of the app, there are some minor hiccups. First off, for a streaming media player, we’d like to see an option for downsampling some of the larger files. We love ourselves some 3200kbps MP3s now and then, but those of us on 3G connections have to wait upwards of a minute to listen to a high quality MP3, and sometimes, when you just need a tune on the go, downsampling would be a welcome addition. Also, we’re not sure if this is a bug or a “feature”, but you can’t seek inside a track. Doing so takes you to the beginning of the track. It seems like Amazon meant for this to be functional; if it wasn’t, you’d think Amazon would disable sliding of the seek bar. We hope an update will address this.

Amazon has a great deal going right now that gives you 15 extra GB of space for a year (for a total of 20GB) if you buy an MP3 album from their music store. There is no limitation on it, and we’ve found some extremely cheap albums that activate the free space. This worked well, and we didn’t experience any hiccups getting this to work.

It’s a great service, and it’s something that seems like an obvious play for anyone in the digital music business. It’s almost too good to be true. According to record labels, it is. WSJ reports that Amazon may have rolled out the service a bit too early, as it is still in negotiation with major labels to acquire licenses for hosting and streaming the music on their servers. Amazon doesn’t feel that it needs licenses to store the music, but streaming the music opens up a legal can of worms that Amazon is confident it can get through unscathed. Releasing the service before talks have concluded was a risky move on Amazon’s part, but it shows that they’re pretty sure things will go smoothly on the legal front.

Cloud Drive beat Google to the punch. Google had announced this functionality in an as of yet unannounced version of Android at Google I/O last year. The demo exhibited at the conference was impressive, and had people chomping at the bit to get their hands on such a service. Now that Google will be entering an already occupied market, they’ll have to step up their game to compete. Media services has been one of Android’s weakest contributions, and getting this service off the ground, especially now that Amazon has such a good product in the market, is becoming more important by the day.