AMD could launch its new desktop Renoir APU lineup in two weeks on 21st July, according to a new report from Wccftech. The fellow outlet cites sources close to it have confirmed the date of the launch of these new Ryzen 4000 series desktop APUs.

Here may be the kicker though, as Wccftech further adds that the new APUs won't be immediately available to the public for purchase and System Integrators, and OEMs will get the first taste of the 4000 series desktop APU goodness in the form of the Ryzen 4000 PRO series. In fact, this isn't the first time such a rumor has arisen as last month igor'sLAB alleged the same thing and only differed from Wccftech regarding the launch date of these PRO models stating that these new APUs will be quietly launched to SIs and OEMs on 7th July, which is today. It is being speculated that the older 3000 Matisse APUs have higher margins and as a result, AMD doesn't want to upset the sales of the previous-gen chips by introducing the 4000 series yet.

Just a few days back, a Dutch retailer Central point (via momomo_us) had listed tray prices and specs of these PRO APUs suggesting the possible impending launch of these SKUs. While its best not to look much into the prices of these parts since they are often placeholders, the leaked specifications are rather intriguing as the OPN number of these parts matches those from a previously leaked Ryzen 4000 SKU list from igor'sLAB. 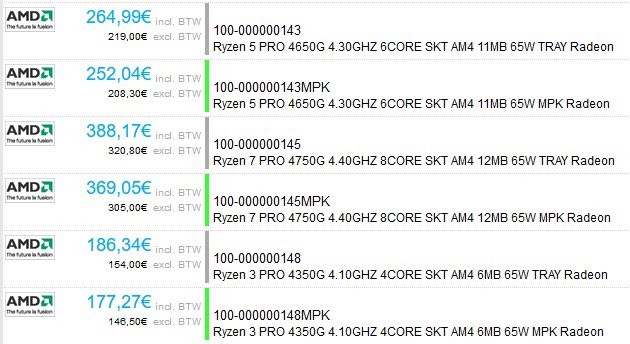 By cross-examining the OPN numbers of the Central point retail listing with that of igor'sLAB leak, we are able to identify the alleged specifications of the new Ryzen PRO 4000 APUs.

For the most part, they are similar to the mobile Renoir variants barring the higher clocks which is to be expected from desktop models due to additional power headroom.