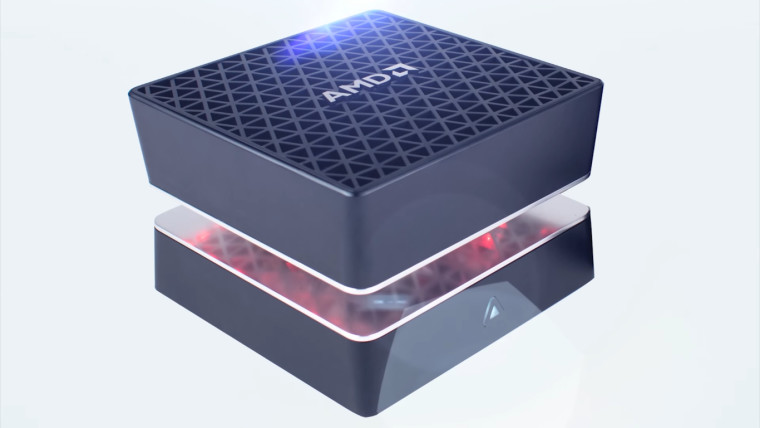 Remember Project Quantum? The custom prototype AMD mini PC that stole the limelight of the Radeon R9 Fury X launch at the E3 2015? After much speculation over the years of whether AMD would ever release the mini PC into the wild, there seems to be a tiny bit of confirmation that the Quantum PC project isn't dead thanks to a patent uncovered by Twitter user PeteB. The patent was filed by AMD earlier this year and describes the Project Quantum. The device is easily recognizable thanks to its unique design.

The Radeon Fury X, codenamed Fiji, was supposed to be the big reveal at the 2015 E3 as a potential contender to Nvidia's GeForce 980 Ti, but Fiji was somewhat underwhelming and by the end of the show, the company instead found fans and journalists drooling over the custom-cooled Quantum mini PC that Team Red had designed as a prototype for running VR games. AMD, however, did not intend to sell the Quantum PC at the time as its own Bulldozer-based FX processors were severely lacking in instructions per cycle (IPC) and would bottleneck the accompanying Radeon Fury based GPUs inside. There was always the option to include an Intel CPU in the final public product just like in the prototype that AMD showed off but Team Red decided to stall any plans for a public release of the Quantum PC back then.

However, times have changed a lot since then and AMD may believe this to be the right time to revive the project as the company claims leadership gaming performance in CPUs. The first-gen Zen itself had a 52% IPC gain over the final Bulldozer-derived architecture codenamed Excavator, and with significant iterations with Zen 2 and Zen 3, the IPC lead over Bulldozer has nearly been doubled. Not only that but the upcoming RX 6000 Big Navi GPUs based on RDNA 2 architecture could also be challenging Nvidia for the throne, and RDNA has also proven to be a much more efficient gaming architecture than GCN derivatives like Fury.

In this video back from E3 2015, AMD Quantum PC designers talk about their ambitions and design goals with Project Quantum.