According to Comscore, Android is doing a good job gaining smartphone market share in the US. The statistics cover October of last year, through this past January. According to the numbers, Android saw a 153.57% increase in the number of people using the platform, allowing Android to overtake Palm in overall market share.

Android now owns 7.1% of the US smartphone market. As of October 2009, they only held 2.8%. The rapid growth that the platform has experienced is mind-boggling and can largely be attributed to the number of devices launching with the platform. Google's strategy with Android is to get as many people onto Google services as possible. Android is open-source, and the entire Open Handset Alliance (consisting of most of the major phone manufacturers) has pledged to support the operating system. As more devices hit the market, we will continue to see large numbers out of Android.

RIM and Apple both gained a slight piece of the market, while both Microsoft and Palm lost a few percent. The percent change for each platform is the thing to look at. That's where you can really see the growth. Below are the numbers. It's unlikely that Android will lose any steam in the coming months. With new platforms expected from both Apple and Microsoft, we will likely begin to see growth from them as well.

Above image taken from Phandroid. 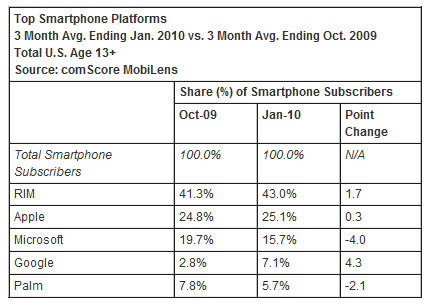