Anonymous are good at what they do. The figureheads of the 'hacktivist' movement enforce their own ethos; never attack sites focusing on charitable donations or children. They have no problem hunting down those who break this code, and that's exactly what they did this week.

"AnonVoldemort" is a hacker who wanted to impress the group. He turned his attentions to RedSky.tv, who produce documentaries detailing poverty in New Zealand. Sales of the documentary would then provide funds for charities that could help the children in direst need. On July 25th, Voldemort made his mark, and sent the below tweet. 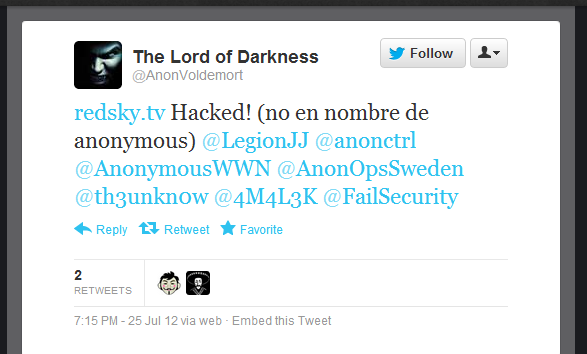 By mentioning all the active names on Twitter, Voldemort merely drew more attention to his actions.

The hacker's Twitter account is still open, but may not be tweeting regularly. He makes the claim to be "LulzSec Reborn" in his Twitter bio, despite the main group having disappeared or been arrested.

Bryan Bruce, the owner of Red Sky, appealed to the internet via Facebook to see if the wider community could help him. Some people began to hunt for the hacker through Anonymous affiliations. Within a day Bruce had an email detailing the person he knew only as Voldemort. Anonymous identified him as a 35-year-old living with his mother in Madrid. Bruce made the following statements to a local newspaper:

"Apparently, one of the rules is you don't hack charity sites, you don't hack sites of people trying to help kids. This guy was trying to impress them, to try and get into their group and boasting about what he'd done - but they turned on him, they chased him."

"This is the other side of this group. I'm not going to make comment about what they do in other areas, but this was a real Robin Hood thing. They just decided this was not good. It's extraordinary."