As part of the deal to acquire the Huffington Post, co-founder of the news site, Arianna Huffington, will be promoted to become president and editor-in-chief of a new subsidiary to be created by AOL, The Huffington Post Media Group.

The Huffington Post Media Group -- which Arianna will lead -- will bring most of AOL's content sites including Engadget and TechCrunch under the Huffington banner. Other sites to be bought under the one umbrella include Moviefone, MapQuest, Black Voices, PopEater, AOL Music, AOL Latino, AutoBlog, Patch and StyleList.

Tim Armstrong, Chairman and CEO of AOL, describes the deal as being the key to providing the "next-generation American" online experience and says the "global reach" will make for new "content, community, and social experiences."

"Together, our companies will embrace the digital future and become a digital destination that delivers unmatched experiences for both consumers and advertisers," Armstrong said today in a statement.

Huffington says the deal is "full of visions", saying it's a "perfect fit for us. By uniting AOL and The Huffington Post, we are creating one of the largest destinations for smart content and community on the Internet. And we intend to keep making it better and better."

Huffington Post's founders and investors will share $315 million -- of which $300 million will be financed in cash -- with the company not publicly listed and remaining private. While both company's boards have signed off on the deal, AOL says it remains "subject to customary closing conditions, including receipt of government approvals".

The acquisition of Huffington Post follows that of TechCrunch, which was acquired by AOL late last year for at least $25 million as the company seeks to grow and expand their online content presence. 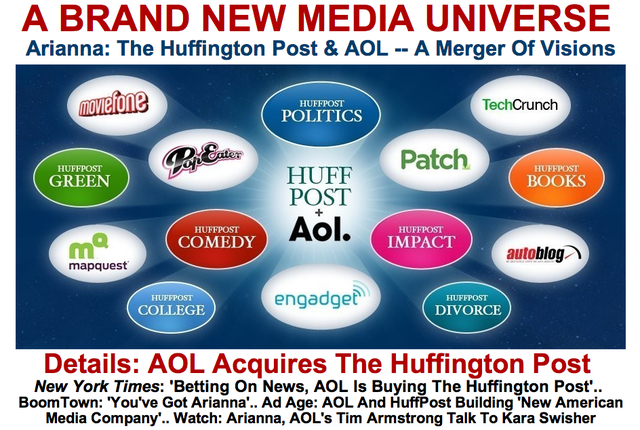