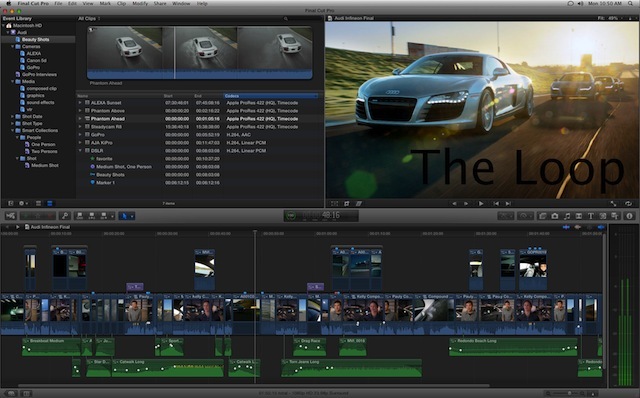 Apple has asked for feedback on FCPX from industry professionals, and so the workflow has been improved with the user in mind. There is no longer a need to wait for the ingest process to complete before working, and during the process clips can be automatically stabilised and cleaned up. Building on the Faces feature from iPhoto, FCPX is able to detect people and shot types. Range-based keywording, eliminating the need for splitting a clip up for separate keyword groups, combines with shot and people detection to create Smart Collections. Users can base Smart Collections on how many people are in a shot, media type, the framing of a shot, and many other options.

The new version of Final Cut Pro brings with it a wide range of new features, such as a magnetic timeline and localised image adjustments. The interface is notably similar to iMovie, but quotes from professionals indicate a simplified interface is the least of their worries. "Editors just want to make great cuts and Final Cut Pro X makes that easy," writes Scott Ivers. Dan Devlin of Electric Entertainment was equally positive, adding "This program represents the beginning of a new era in digital editing."

Final Cut Pro X will be available from the Mac App Store in June for $299.