Apple has been clear on their message to keep the iOS platforms clean from impurities. A new patent by the company is designed to prevent people from 'sexting,' or sending sexually explicit text messages. In addition to the ability to filter such messages, other filters can be used with the goal of improving the grammar or even language level of users. 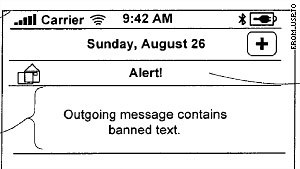 Do not be alarmed thinking that this will be instated and users will have no control over what is filtered. The technology is designed for use by parents on their child's or children's phones. CNN reports that the technology could find a place to prevent children from sexting and actually work to improve other language skills. An implementation could require a Spanish student to send a certain number of messages in Spanish before being allowed to send messages in other languages. The tool could also require users to find and fix spelling and grammar issues before sending the message.

Apple has decided to filter in a new way, versus simply blocking a set list of expletives, but instead evaluating the overall message using filters that are appropriate for the age and grade level of the child. Instead of limiting a user to only pre-selected numbers or emails, this idea focuses on the actual content that is being sent. Adapting to the child's age and grade offers more customized and carefully planned out filtering than other methods.

Exactly how this will be implemented is not clear as of now, but it appears that it would be built into the main messaging app in iOS when it is implemented. While this has a variety of text-based filters, the patent does not show support for explicit images.