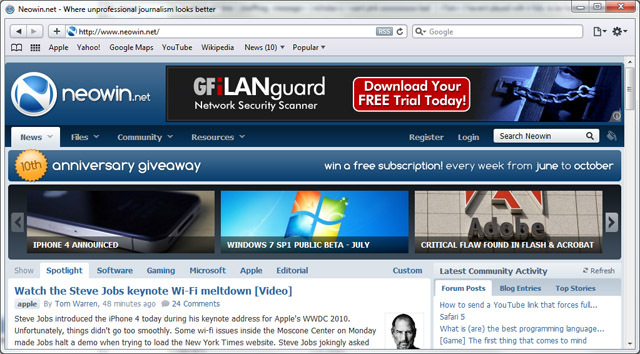 Apple today has released Safari 5, the latest version of its webkit based browser. Touting several new features, Apple promises it's the most innovative web browser yet. As with the previous version, the new version of Safari is available for both Windows and Mac.

Similar to any RSS reader, the new version of Safari includes Safari Reader, allowing users to view multiple articles from a site via a scrollable environment. Users simply click the â€œreaderâ€ icon in the browser to display articles in Safari Reader. Safari will then load a clutter free view focused on clear, simple reading.

Safari's JavaScript engine is powered by Nitro, which allows for a 30% faster performance gain over its predecessor. In comparison to other browsers, Apple states Nitro performs 3% faster than Chrome 5.0, and over twice as fast as Firefox 3.6. DNS prefetching has also been implemented, allowing for faster loading of previously visited sites when users return to them.

Apple has also created the free Safari Development Program, which allows developers to enhance Safari with extensions based on HTML5, CSS3, and JavaScript code. An extension builder allows for development, installation, and packaging of extensions in an easy to use environment. Safari extensions are placed in sandbox shell, allowing for enhanced security and better stability.

Special thanks to giga for the heads up