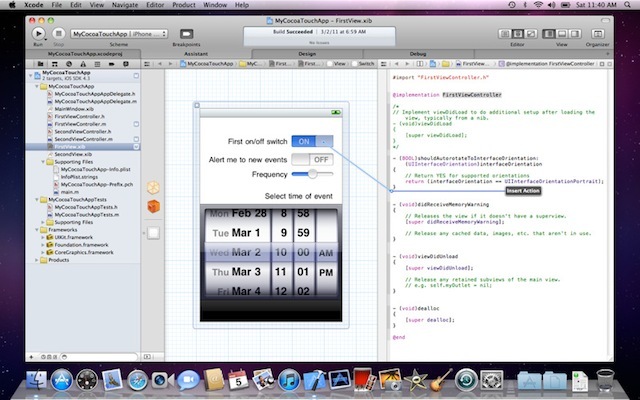 Apple has today released a new version of their Xcode development environment for a small fee. Xcode 4, the first version available on the Mac App Store, costs $4.99, but members of the iOS or Mac Development Programs will be able to download it for free.

Xcode is used for developing both Mac OS X and iOS applications, and both groups of developers will see improvements to their workflow with Xcode 4. A new single window interface integrates debugging, testing, design, and coding into one panel. The Apple LLVM will also underline code mistakes as you type, and features automatic code correction for small errors.

Whether Xcode 4, like previous versions of Xcode, will be bundled with Mac OS X Lion has yet to be revealed, though it's entirely possible Apple is hoping to trim down the disc contents and move entirely to online distribution. Considering the fact that Snow Leopard was focused on "trimming down" the OS but still included Xcode, it seems unlikely for Apple to reverse its stance on bundling Xcode.

Today's release should come as no surprise to developers, as a second golden master seed was released just under a week ago. First shown at last year's World Wide Developers Conference, a golden master seed was leaked at the start of February, indicating an imminent release. Xcode has only seen minor improvements since Xcode 3 was released three and a half years ago, so today's release is likely to be be well-received by the masses of iOS developers that have flocked to the platform during that time.