As expected, Apple has this morning revealed version 4.0 of its iPhone operating system. The update has been a long time coming (and still will be, at Apple's big releases generally ship towards the middle of year along with new hardware), as the iPhone has seen very few updates since last year, signaling that Apple has been hard at work. The Cupertino-based company is a big player in the world of mobile devices (as Steve Jobs noted at the iPad launch, they're a mobile devices company), so when they announce big plans for the future of the iPhone OS, people tend to listen.

iPhone OS 4.0 will give developers access to a ton of new APIs, including full map overlays, Quick Look, and even 5x digital zoom. See the photo below for the rest of them. 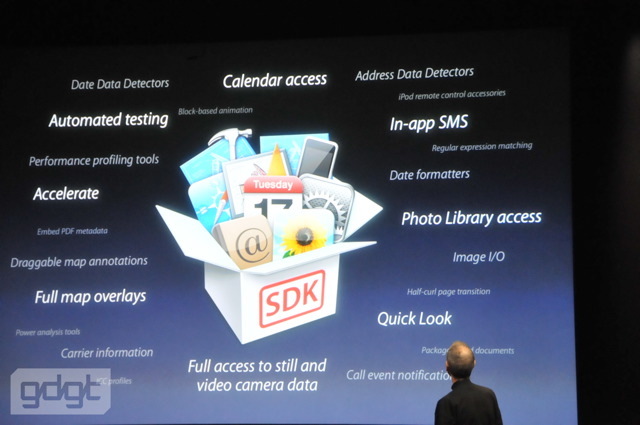 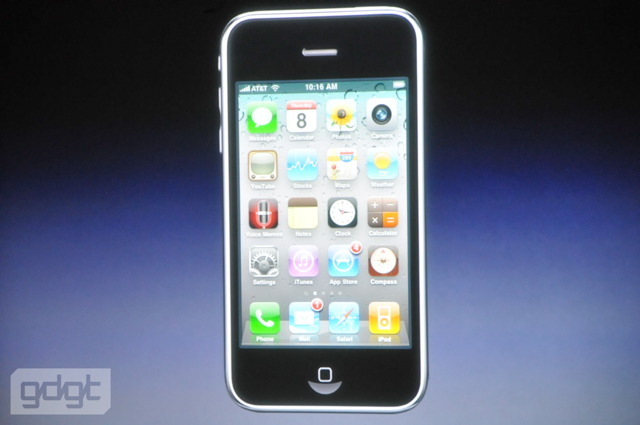 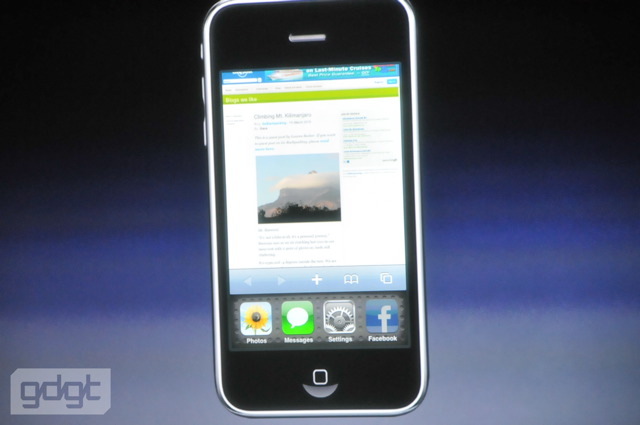 According to Scott Forstall, Apple executive, Apple has provided developers with 7 new ways to implement multitasking. The first of which is background audio streaming, which will work fantastically with applications such as Pandora, which was demoed on stage. Previously, if an app such as Pandora were running and suddenly closed, the streaming music would stop – until now, of course. Additionally, according to the Pandora developers, it's fast to implement, taking them just a day to give their application full support for background processes.

Another implementation demonstrated was by the developers at Skype, a popular video chatting/VoIP service. The application was demonstrated running in the background, with the iPhone receiving phone calls just fine with the application closed, meaning you no longer have to keep it running if you're expecting a call. This is a great piece of news for Skype & iPhone users around the world.

Another technique Apple has provided developers with is background location. Currently with turn-by-turn navigation applications, they work well provided you keep them open; if they're closed, you won't be getting any more updates. Now the GPS can continue to update in the background, though that uses up a hefty amount of battery life, so it's expected that most users will want to use this in the car where they can keep their phones charging. If an application has tracked your location in the past 24 hours, you'll be able to see a small arrow in the status bar, so that you'll know if something has been tracking you. 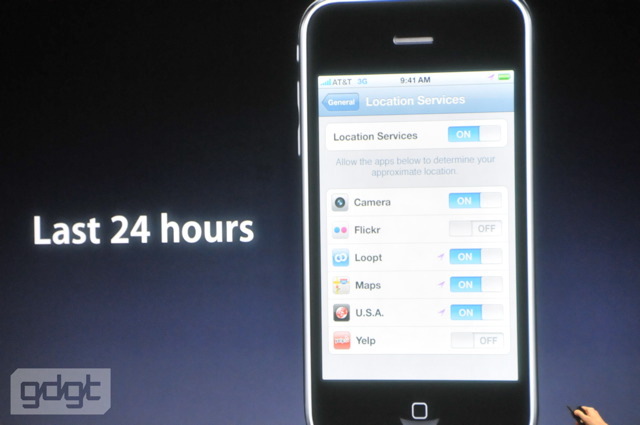 The final set of features includes local notifications, task completion, and fast app switching. Local notifications are similar to push notifications except they run locally, without a server in between – this will be handy for apps such as Flickr, as Scott Forstall suggested, which can upload photos in the background as you browse elsewhere, then notify you when they're done.

Apple has implemented a new way to organize applications, dubbed 'Folders'. It works pretty much as you'd expect, by providing you with folders for different types of applications, allowing you to name the Folder and drag in whichever pieces of software you like. 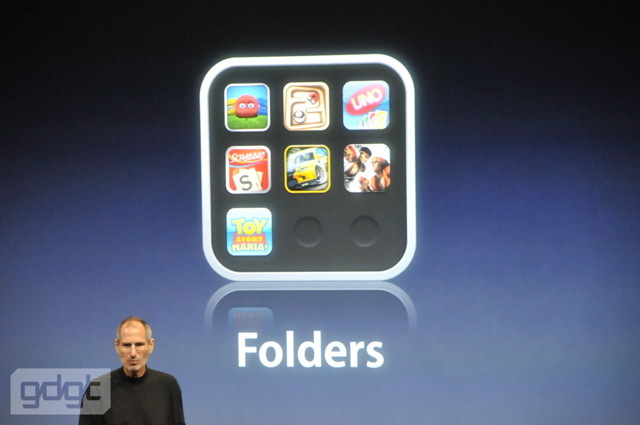 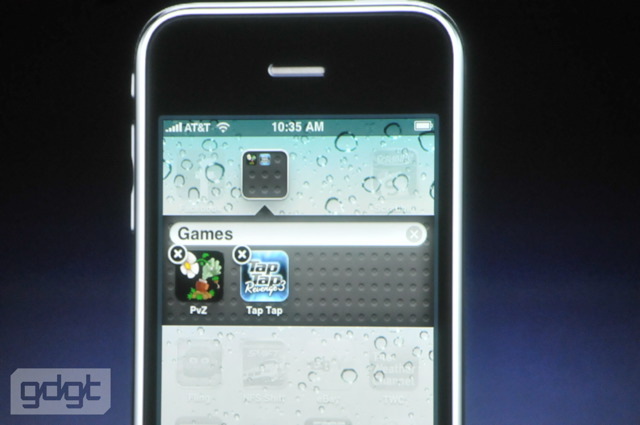 If Jobs is to be believed, it means that the application limit on the phone is now at 2,160, up from the previous 180, fantastic news for those who have a huge amount of applications installed.

The Mail application has been improved, bringing in a bunch of new features. Number one of the request list is a unified inbox, which Apple has happily provided, in addition to thread email conversations, and fast inbox switching. There's not much else to discuss on the topic, as the improvements are pretty self explanatory. Exchange customers will be pleased to know that more than one Exchange account can be added now, too.

Following the release of iBooks on the iPad, Apple has now implemented the same store/application on the iPhone, allowing users to read their content wherever they go. The current page will be stored in the cloud, in addition to bookmarks, meaning that iBooks on both applications will keep perfectly in sync for those who frequently switch between the two. 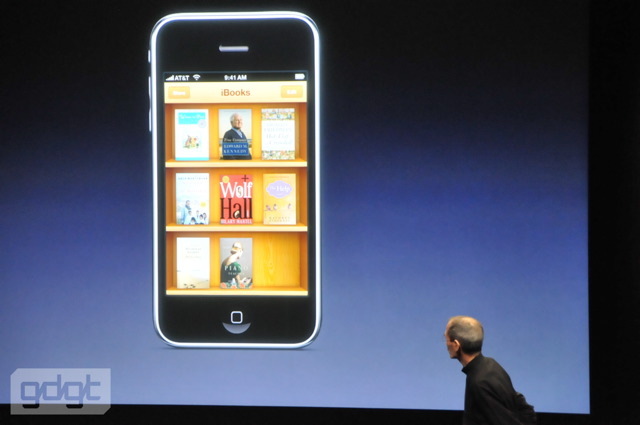 The iPhone has been greatly improved for enterprise users. Emails will be better encrypted, with developers able to encrypt their own application data to be sent, in addition to "mobile device management." Forstall added that SSL VPN is now included, in addition to wireless app distribution for companies that use in-house apps for their daily operations.

Apple has added its own gaming network, similar to Xbox Live and the PSN. You can be paired up with users of your same level of skill, in order to play against them in any given game. Forstall said,  “We wanted to make this even better — we’ve added a social gaming network. We do automatic matchmaking, we’ll find others with a similar ability and match them against you. You can see how you’re progressing in a game with achievements."

The seventh of Apple's seven "tentpole" features is iAd. It seems the rumors about Apple introducing a mobile advertising network were very much true, as they will now be providing their own implementation of iPhone advertising for developers to use as they see fit. Jobs noted that whilst free apps are great, the company wanted to help the developers make a bit of money, and this is the way to do it. Jobs said, “The average user spends over 30 minutes using apps on their phone. If we said we wanted to put an ad up every 3 minutes, that’d be 10 ads per device per day — about the same as a TV show. We’re going to soon have 100m devices. That’s a billion ad opportunities per day!” Developers will get an "industry standard" of 60% of the cash made from advertising. Jobs managed to get laughter from the crowd when he noted that the ads implemented by iAd are done completely in HTML5, shunning Adobe's Flash platform. 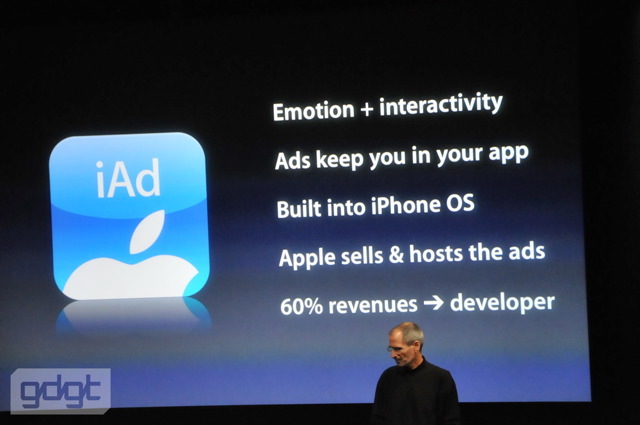 Ads will truly be embedded within applications – videos or any other form of media won't take you out the application, but instead, they'll play right then and there, as iAd is implemented within the operating system itself. Developers can go to great lengths with the advertising it seems, with a demonstration of a full blown game features as one of the advertisements.

iPhone OS 4.0 will be for the third generation iPod touch as well as iPhone 3GS (and presumably any new hardware released later in the year), in addition to running on the iPad. The older hardware will run iPhone OS 4.0 but not all of the features, as the hardware simply isn't capable. That's about all we've got from Apple this morning, but expect to see more news rolling out soon when developers get their hands on the early build. 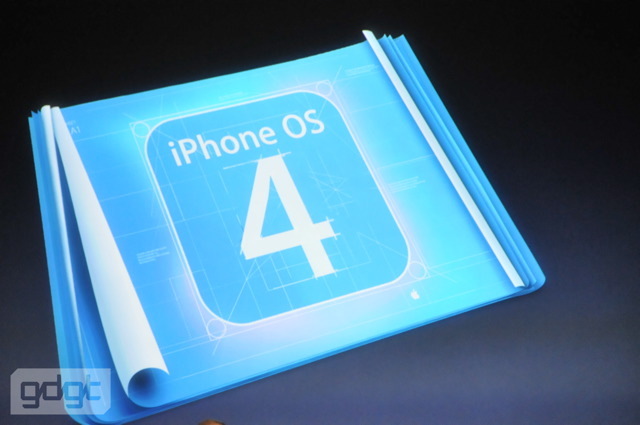