Apple's no stranger to acquiring talent in the iOS community for blockbuster additions to new iOS versions. Two of iOS 5's major new features, an improved notification system and a new voice-activated assistant, came from third party developers. MobileNotifier, the incomplete predecessor to iOS 5's notifications, can still be acquired via a Cydia repository. On the other hand, people on the old Siri app, the forerunner to the Siri feature in the new iPhone 4S, are getting an unpleasant surprise upon launching the application: 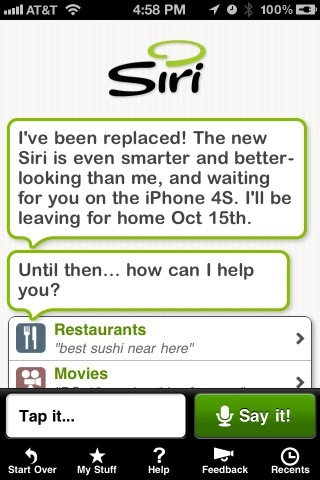 Siri was acquired way back in late April of 2010, although the application remained available for download up to today. According to TechCrunch, that changed following this morning's Apple press conference. Siri's servers were temporarily disabled, and then re-enabled but with a warning to its current users.

Non iPhone 4S Siri users have access to the application up until the iPhone 4S's release on October 15, when the old Siri servers will be turned off for good. This leaves the iPhone 4S, its successors, and potentially future iPod touches as the only Siri capable devices in the near future.

The impending shutdown is very similar to the fate of Lala, which Apple acquired in December 2009 and subsequently shut down on May 31, 2010. It is believed the technology behind Lala contributed towards iCloud and music streaming in iOS 5.