After the reports of a lost iPhone that was found in a bar somewhere in San Jose, California, questions have been floating if this is definitely the next iPhone, named iPhone 4G/HD, and if it belongs to Apple.

A letter from Bruce Sewell, Senior Vice President & General Counsel, to Gizmodo said:
“It has come to our attention that GIZMODO is currently in possession of a device that belongs to Apple. This letter constitutes a formal request that you return the device to Apple. Please let me know where to pick up the unit.”

This doesn’t answer the question, “is this the next iPhone”, but is solid proof that this device is definitely a prototype that Apple is experimenting with. Whether or not you are still skeptical about the entire ordeal, this is likely the iPhone 4G/HD that we can expect to be re-unveiled on June 22. 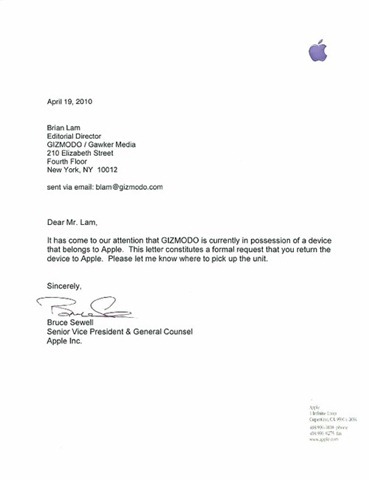