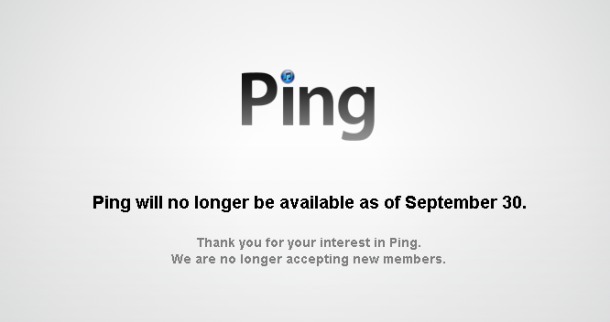 Ping will soon be written up as one of Apple's few major mistakes. The social music service, which launched two years ago with the launch of iTunes 10, will be shut down by the company on September 30th.

Apple CEO Tim Cook hinted strongly back in June that Ping was not long for this world but on Wednesday, the iTunes page for Ping, according to News.com, confirmed that it would no longer be taking new members starting immediately and the service itself will shut down by the end of September.

Ping was supposed to be Apple's answer to Facebook or Twitter, at least for iTunes users. It let people list their albums and songs they were listening to on an online feed so that their friends could subscribe to their music list. The feature was available for the Windows, Mac and iOS version of iTunes.

However, Ping simply didn't generate a lot of interest from all those iTunes buyers, who were already sharing their music information via other social networking systems. For the launch of iTunes 11, Apple said that it will add ways for Facebook and Twitter users to share their recent iTunes music purchases along with their own music likes.