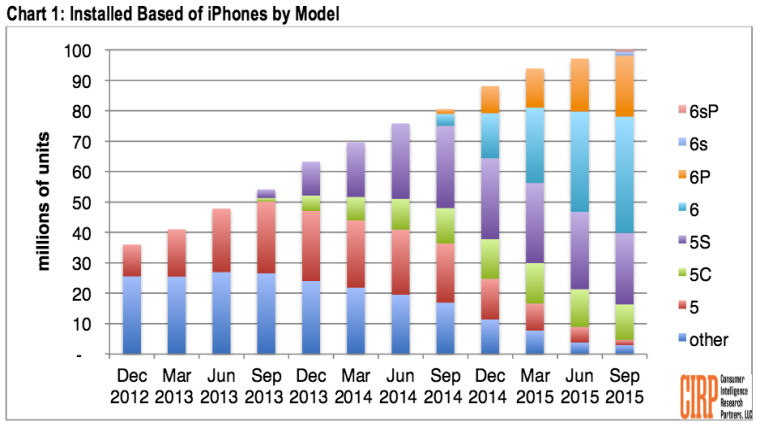 In what will be music to Apple's ears, the usage of the iPhone has grown to over 101 million devices in the United States, with the iPhone 6/6P being the most popular according to a new survey.

The survey conducted in September by the Consumer Intelligence Research Partners (CIRP) of 500 U.S. Apple customers found 101 million iPhones are currently in use, and almost two-thirds are iPhone 6 or higher, with the usage of the iPhone almost doubling in two years from early 2013.

The iPhone 6 and 6P was found to be the most popular, since its launch in September 2014 over 60 million were sold, two times the sales of the iPhone 5S in its first year. The low numbers for iPhone 6s/6sP were based on the first weekend of sales for the device, the numbers will undoubtably be higher now.

CIRP's findings suggests that Apple's iPhone "PLUS" option is paying off with the larger-screened iPhones making up a large chunk of the iPhones in use in the United States. But the findings also show that iPhone adoption is slowing as the U.S. market matures.

In the September 2015 quarter, the installed base grew 4%, compared to 6% in the September 2014 quarter. In the past eight quarters, the installed base grew on average 8% per quarter, which is half of the growth Apple saw in the December 2013 quarter after the launch of the iPhone 5S. The slowing growth means that Apple will now have to work very hard to win over loyal Android users.