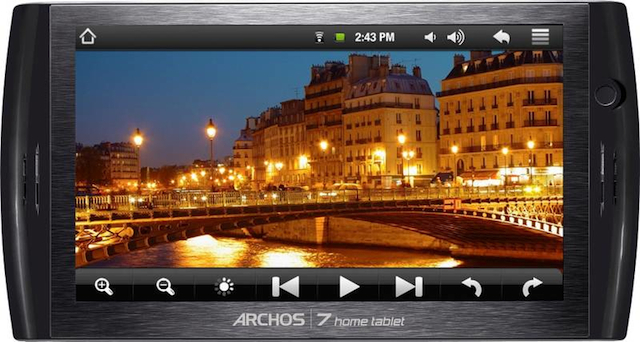 Archos on Thursday officially announced their upcoming Android-powered tablet, the Archos 7. Running a custom version of Android 1.6 on a seven inch widescreen display, the new device is slated for launch this May 17 at a low $200 price point.

Because the tablet wasn’t built to replace a standard notebook computer, Archos is betting on selling it at a price level that many similar portable media players are priced at. (The base iPod Touch and Zune HD models are both $200).

In addition to its 16:9 widescreen seven inch display, the tablet will be loaded with 8GB of storage that should last users for about seven hours when playing back video and 44 hours for music. Additional features include 802.11 b/g/n Wi-Fi, Bluetooth, microSDHC support, email, photos, eBuddy instant messenger, Aldiko ebook reader, and DailyPaper newspaper reader.

While the full Android Market won’t be available on the device, Archos is bundling their own (much smaller) AppsLib store for downloading additional apps. Full specs are below: