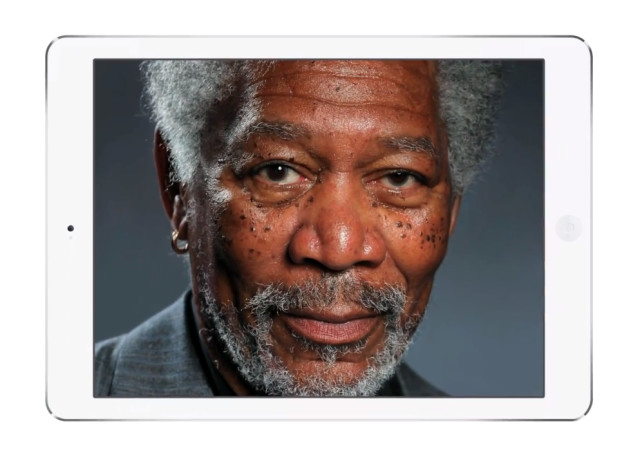 British artist Kyle Lambert spent quite a bit of time creating a digital painting and by the looks of it, it was time well spent. The drawing is an insanely realistic portrait of Morgan Freeman. The image you see above isn't a photo of Freeman photoshopped onto an iPad — that's Lambert's actual work of art.

He spent over 200 hours creating the masterpiece, spawned out of 285,000 brushstrokes. He used iPad app Procreate to get the job done, a creative sketching and painting tool. It's an incredible accomplishment. The amount of detail apparent in the portrait just blows away any other famous attempts at artistry on a tablet, and they are all excellent.

It's pretty hard to make the argument that a tablet can't be used as a creation device with people like Kyle Lambert doing anything but content consuming. Plus this isn't the first time someone has been able to create something so well on an iPad. Microsoft started marketing the Surface as for artistic purposes in October, too, though being best for art generally comes down to quality apps rather than hardware.

You can check out his video of the process of creating the Morgan Freeman portrait below. He also has some other videos uploaded on additional portraits he made, including another pretty realistic one of Rihanna.

Update: Artist Ryan Lambert spoke to Gizmodo to address some of the skepticism over whether he actually created the image or just used an actual portrait of Freeman. "To answer your question, no at no stage was the original photograph on my iPad or inside the Procreate app," he said. Lambert later concluded, "The whole point of the video is that the final image looks almost indistinguishable from the reference photo. If it didn't, then the claim of it being 'the world's most realistic finger painting' wouldn't really be a valid one."