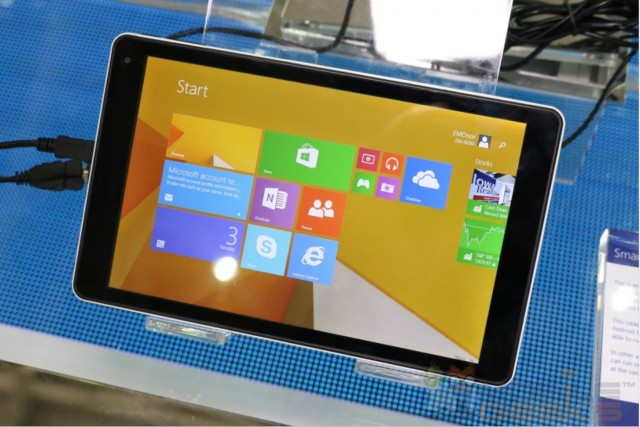 Microsoft has been on a crusade to fight Android at the low-end of the market segment with cheaper Windows devices. They made this possible by offering up Windows for free on devices smaller than 9 inches and also Windows 8.1 with Bing as well..

A new Windows 8.1 tablet has been announced at Computex and it will have a price point of $100. The device, built by Emdoor, has a quad-core Intel Z3735E ATOM processor, 1 GB of RAM, 16 GB of internal storage, and an 8in 1280x800 IPS display. We are quite pleased to see an IPS display in a tablet at this price point, and even an Intel CPU under the hood makes us suspect this device may not be a dog in the performance department.

One issue with the device is that there is roughly 8 gigs of free storage out of the box and that's because it's running the full version of Windows 8.1. But, for $100, that's about what you should expect, as this device meets the minimums for running Windows 8.1.

For Microsoft, this is a big play for the company as it looks to move into the super-low end tablet market and compete with Android who has been the only OS at these price points for many years. Intel, naturally, gets a win here as well as its chips make these types of low price devices possible too.

One area where Microsoft needs to be cautious is that if these devices offer a poor user experience, it could turn off users to Windows 8.1 as they will equate these cheap devices performance back to Microsoft. While we know its the hardware that will slow down the device, the poor performance will still reflect, from a user perspective, on Microsoft.

But, at $100, what can you expect? The device seems surprisingly well-rounded for such a cheap tablet and we will be curious to see if these types of tablets will significantly boost Windows 8.1 adoption rate among consumers.