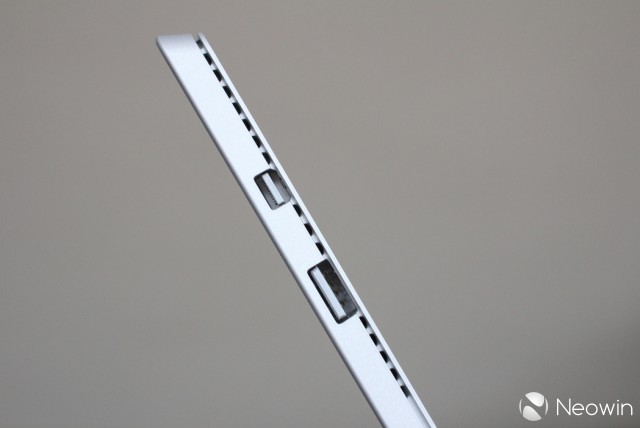 Take a look at the Surface Pro 3, really, take a look at it. What you are looking at is the best of Microsoft engineering as the tablet pushes boundaries of what a modern computer can truly be. Why do we say that? Well, previously, devices like this were shackled to the confines of an ARM based processor which meant lower performance but also less heat. What Microsoft has done is take the same type of form factor but shoved a workhorse processor under the hood; you can splurge for a Core i7 CPU.

The chassis retains the Surface design that we have seen previously. With a silver-matte style finish and angled edges, it’s 100% Surface DNA.  But where it starts to differ from previous devices, besides the size, is how Microsoft has vented the device. There is a small channel that runs around the top perimeter of the device that supports the fan that is inside.

The fan is a bit of black magic here. Typically, when you think of a fan, you think of a loud whirl, heat, and loss of battery life to support the mechanical apparatus. While we likely won’t ever know how much a power-draw the fan taxes the battery, we can talk about the other two items.

First off, you can hear the fan, sorry Microsoft. But, it’s on very rare occasions that you can hear it and for us, we only heard it when running 3D mark and during one instance of a Windows update reboot session. Even then, the fan was not as loud as you would think and only produced a modest hum, but alas, you can hear it.

Apart from those two isolated instances, the fan is the stealth bomber of cooling apparatuses. During the majority of our normal use, we never heard it nor did we feel hot air from any particular region of the device.

The internals of the Pro 3 are a serious leap in technology by including everything in such a compact chassis. Microsoft should be proud of what it has built. Even though it has a fan, because only the cool kids run fanless, or something, we would prefer to have increased performance instead of an under-clocked CPU.

But does the device get hot? That’s a fair question seeing that some ultrabooks can melt your thighs after using Photoshop for 10 minutes. So far, the Pro 3 has remained well within tolerable boundaries for heat. Does it get warm, certainly, hot? Not even once. We have never had the device get above a moderate level of warmth and that’s even when we would run benchmarks on it or perform other intensive tasks.

So, if you were thinking of using the Pro 3 to fry up some eggs on your next camping trip, we are sorry to say that this is not the heat-source for you.